Soufflet Analysts: Corn Prices Depend on Brazil, Argentina and Ukraine 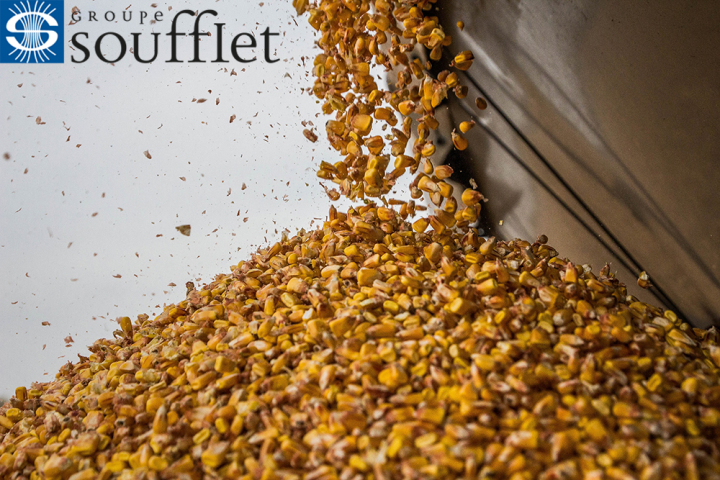 We continue to share the analysis of French Soufflet experts on the fundamental and seasonal factors that will shape the situation in the grain market. Consumption will grow, and production will fall. Such a trend in the world corn balance can be a good sign for farmers who rely on this crop. 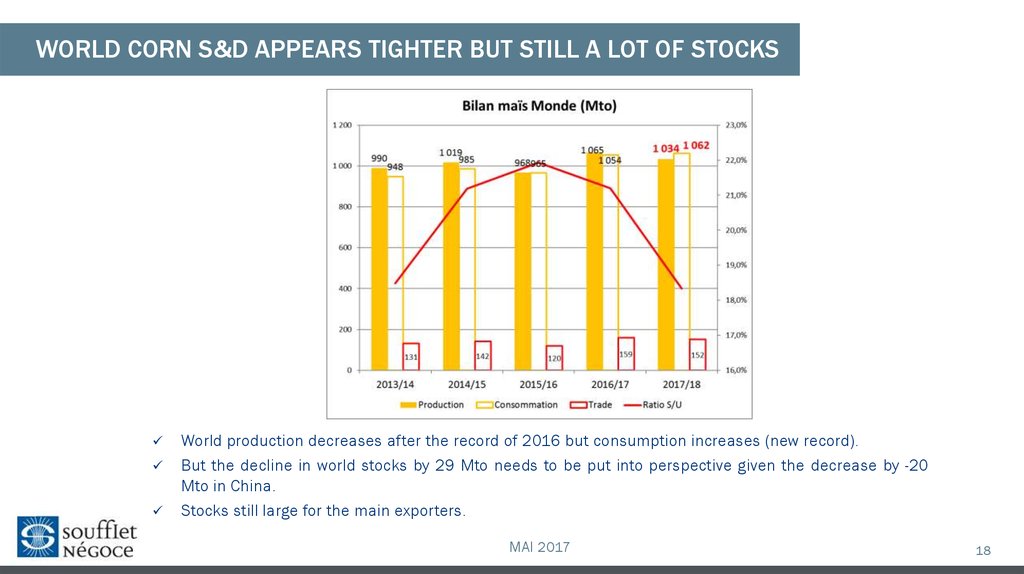 The French company analysts indicate that the world reserves are higher than last year. The US will remain the main exporter of the queen of fields, although the area under this crop has decreased by 4% this season.

In China and the US, the largest decline in reserves this season is registered in the amount of 14 and 13.3 million tons respectively, which makes the total of more than 27 million tons. At the same time the US reserves are an impressive 58 million tons.

Where will they decrease?

In the United States corn areas fell by 4%. Local producers are opting for soybean, which shows an increasing profitability compared to corn. 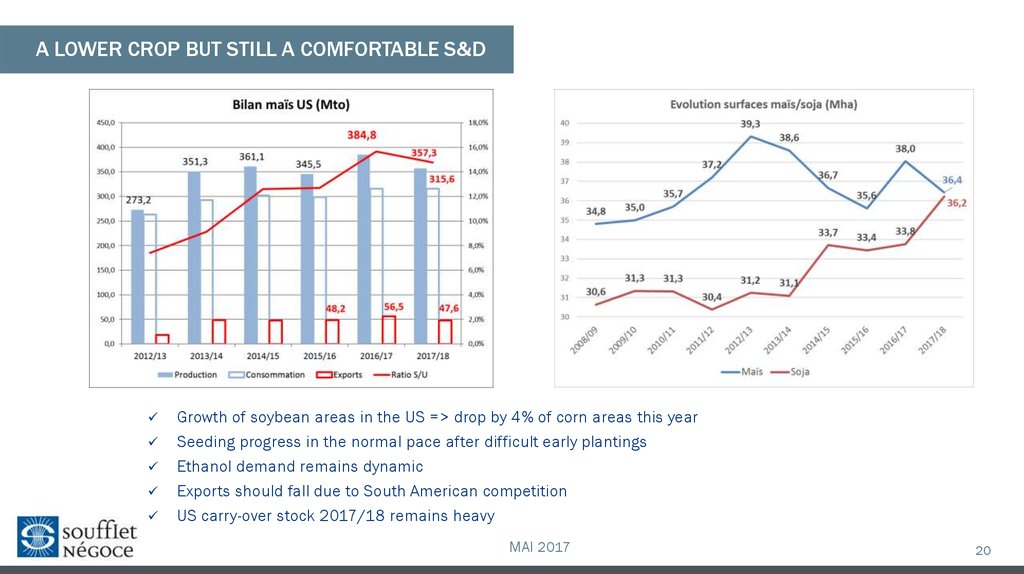 In the current year, the areas allocated for corn and soy in the United States have almost equaled, amounting to 14.7 and 14.6 million ha respectively. According to the analysts` forecasts, this year's harvest may decrease by 27.5 million tons, and will make 357.3 million tons compared to 384.8 million tons last year.

Almost 40% of the corn harvest is used for biofuel processing, but demand in this sector is predicted to be stable and consumption is expected to remain at the previous year level of 315.6 million tons. The export, however, will dicrease by 8.9 million tons - from 56.5 to 47.6 million tons.

However, the carryover corn stocks in the US are still at a high level, reaching 58 million tons this May. This means that overseas grain continues to have an impact on the market. The harvest in Russia will decrease slightly up to 14.3 million tons, with the export amounting to about 5.2 million tons. 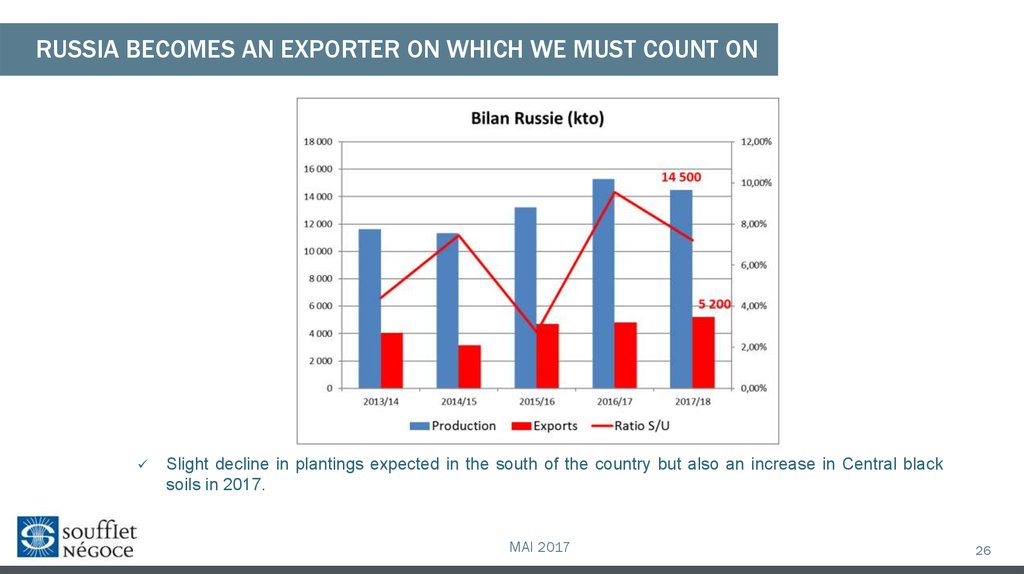 American corn remains an international benchmark, but today the world price depends on Brazil, Argentina and Ukraine according to the French analysts.

Where will it increase?

Last season, Brazil sharply increased the corn harvest from 67 to 93 million tons with an increase in exports from 14 to 32 million tons. This year, good weather conditions promise Brazil the additional yield increase of 2 million tons, with the total of 95 million tons. Last year the increase in domestic prices resulted in the crop areas increase.

Now the corn harvest is in full swing and the data on the yield growth and gross harvest are confirmed in relation to the previous year. 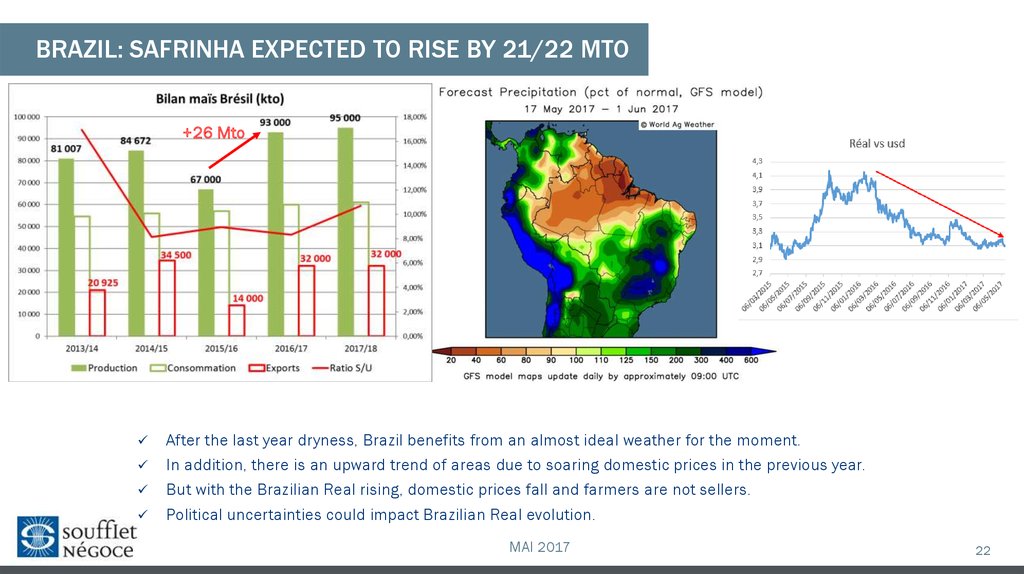 Moreover, with the beginning of the first corn harvest, domestic prices fell by almost 60% compared to the previous year. The average national price for corn in May, according to the FAO data, fell to the level of 369.74 BRL per ton ($ 112- $ 113). The exchange rate of Brazilian Real to the US dollar has a negative impact on the profitability of corn exports. 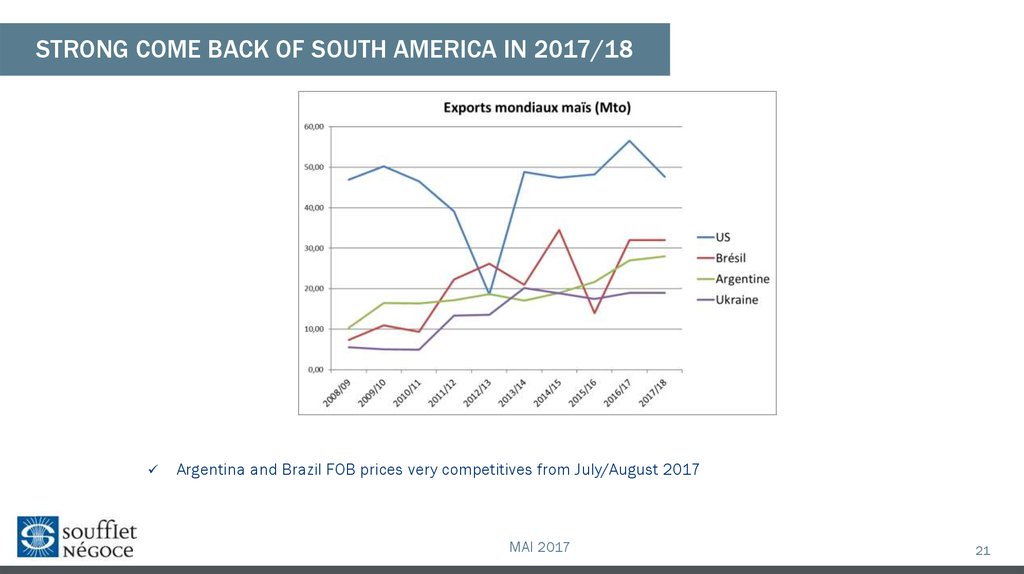 According to the Brazilian media, farmers are restraining the forward sales of grain, expecting devaluation of Real against the background of political instability and rising prices due to crop areas decrease in the US. At the same time there are not  sufficient storage capacities for the record harvest in Brazil. New harvest can be stored in the fields until the rainy season, that is, by the beginning of September. After this, the increase of the export of Brazilian grain will be inevitable. Total export for the year is expected at the same level of 32 million tons. 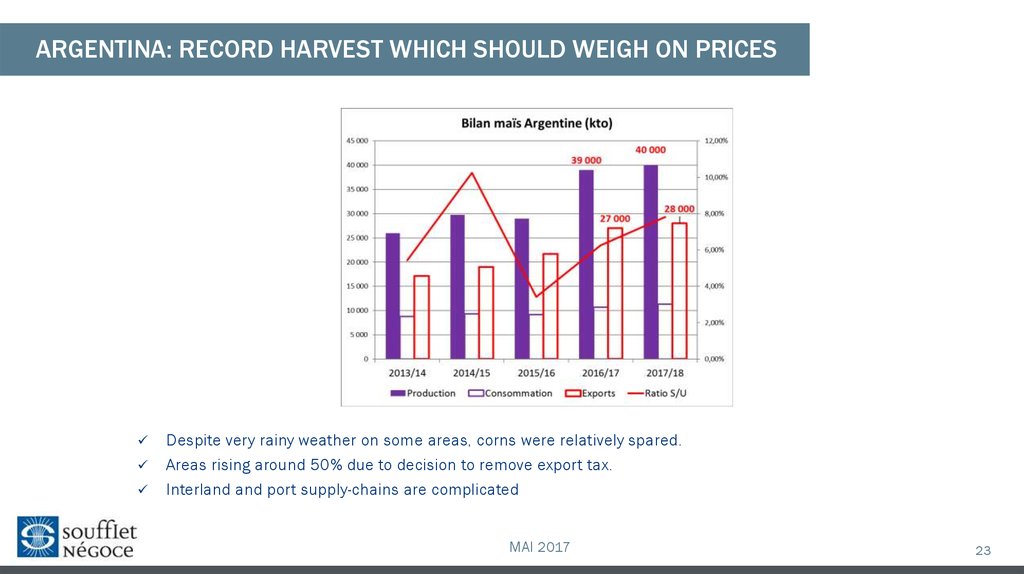 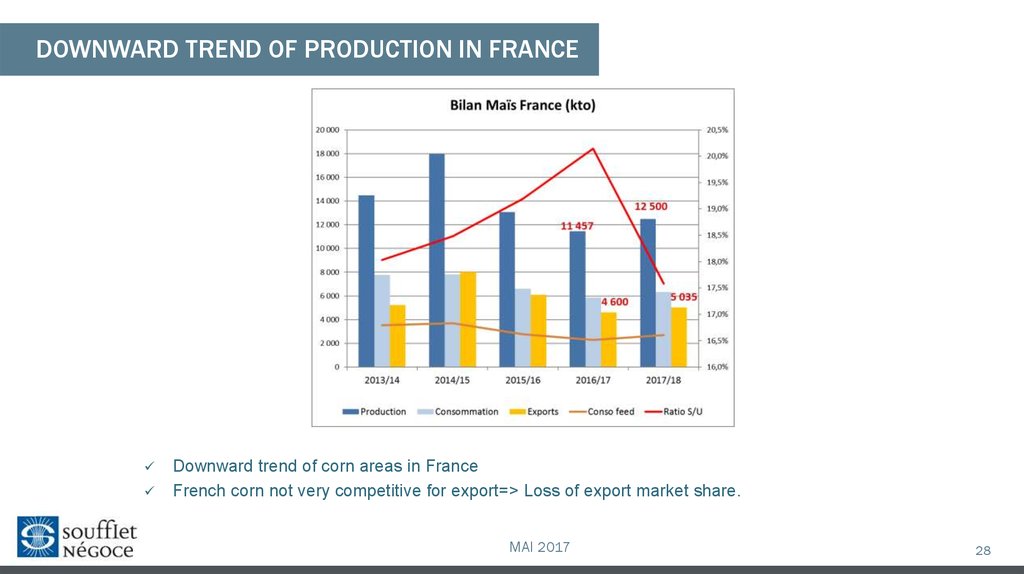 At the same time, French analysts note that corn grown in their country is not very competitive for exports and they forecast reduction of its share in the world grain trade.

Ukraine is the source of stable exports

Soufflet analysts expect a reduction of Ukraine harvest from 25.4 to 24.3 million tons. However, during the past five years, the export flow has remained at a stable level of 17-19 million tons per year, even taking into account a reduction in corn yield to 23 million tons in the season of 2015-2016. Therefore, the forecast for the Ukrainian corn export for this year is 19 million tons. Thus, Ukraine will retain the fourth place in the world for the export of this crop. 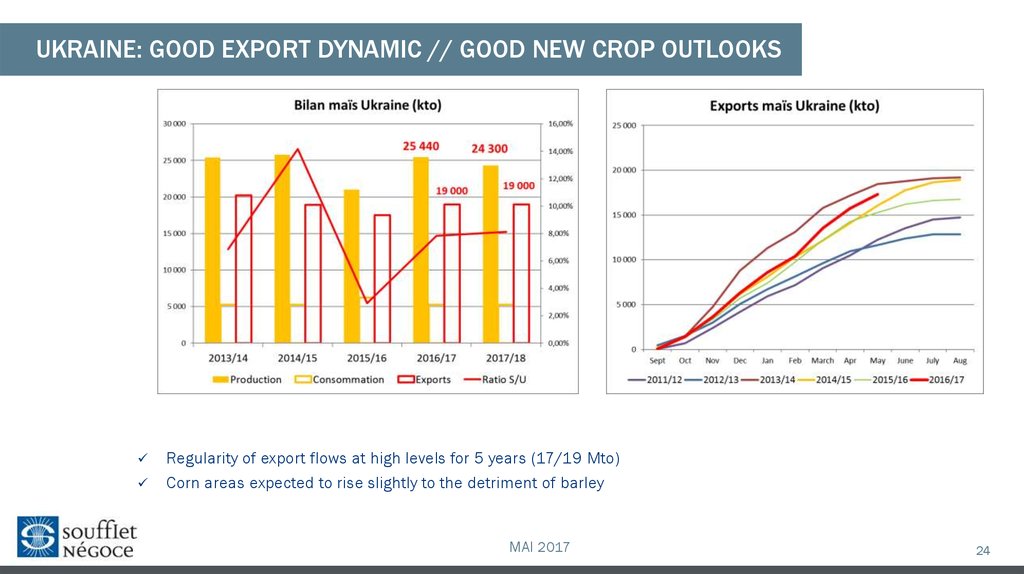 Next year demand for corn in the Old World is expected at the level of 70 million tons, Europe imports about 12-15 million tons of grain. The main market for domestic corn will be the European Union, which will consume about 7 million tons of this crop. 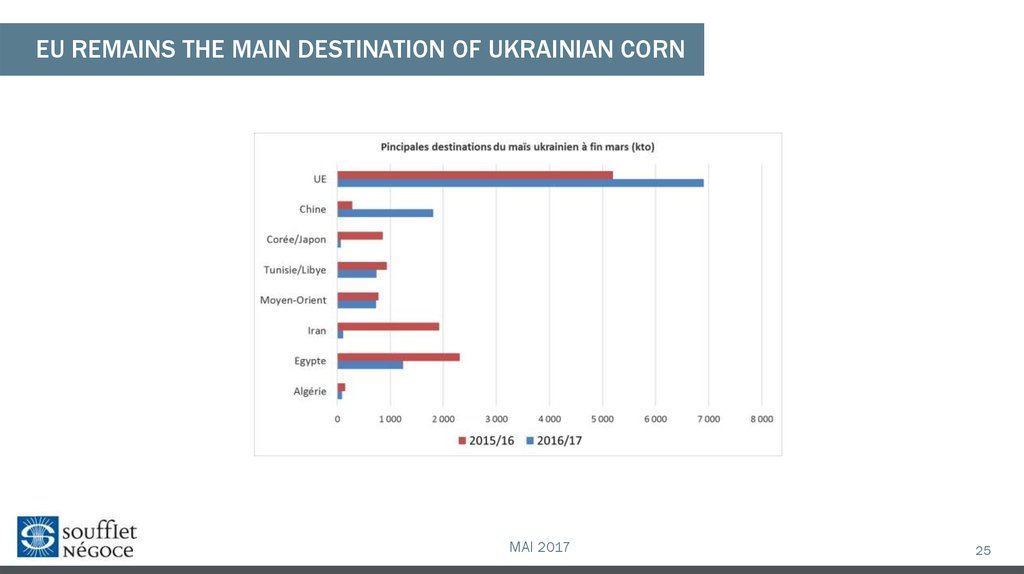 Thus, with a significant decline on the Chicago Stock Exchange or the fall of US Dollar to Euro, the income from supply to the European market can also go down. And this creates uncertainty risks for Ukrainian producers.

The export price forecasted for this year is $ 160 FOB Odessa. China will again become the second most important export market for Ukraine, while supplies to all other regions including Japan, Korea, Middle East, Egypt, Iran, Algeria, will decrease according to Soufflet forecast.

In China in the season of 2017-2018, USDA predicts the reduction of reserves by 20 million tons due to the decrease in production volumes by 5 million (up to 215 million tons) and growth in consumption by 6 million tons (up to 237 million tons). Ukrainian exports to the PRC may reach 2.7 million tons. 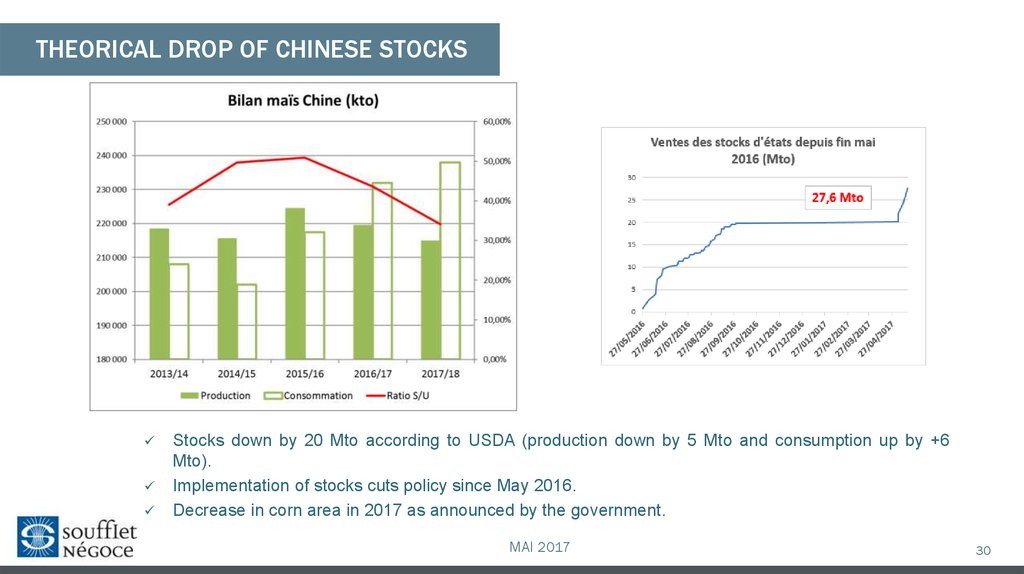 Large world reserves together with the next record harvests in Latin America put  pressure on prices. The increase of consumption and consequently, the demand for corn in the world together with the expected reduction in reserves in China and Europe cause the prices to grow. 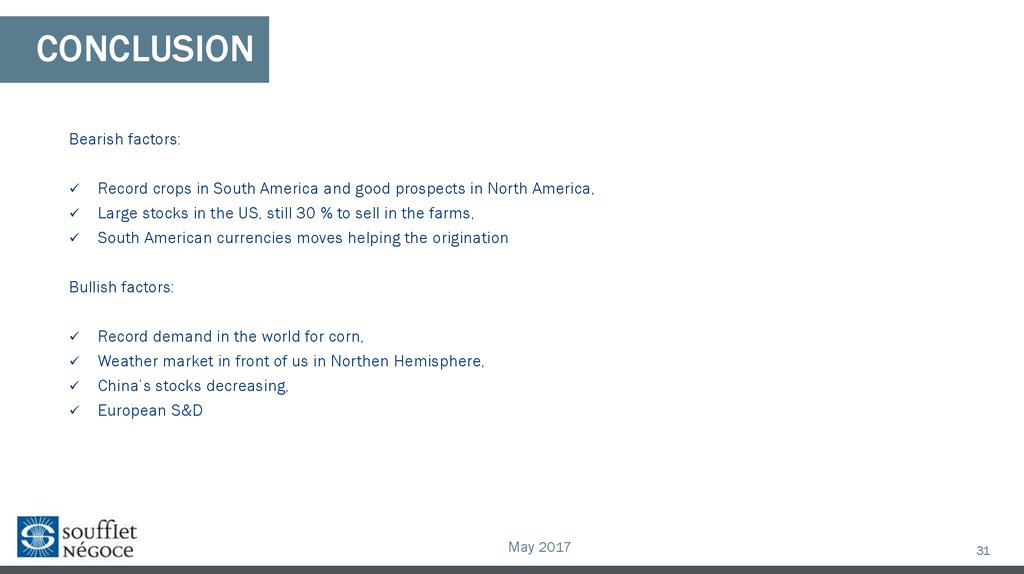 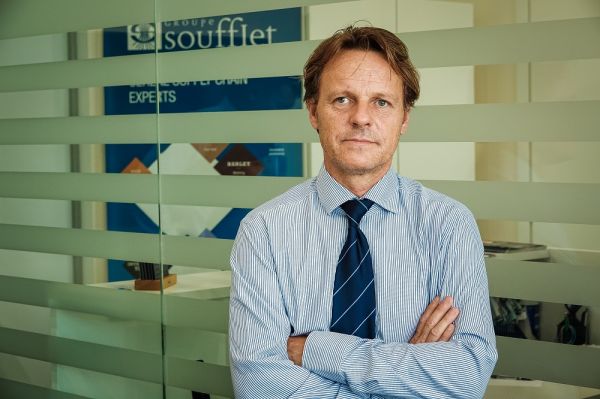 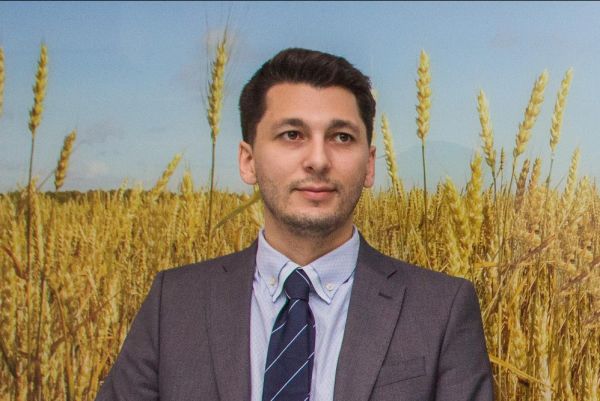 Samuel Robard: There Are Three Keys to Success: Work, Work, and Work
News
184 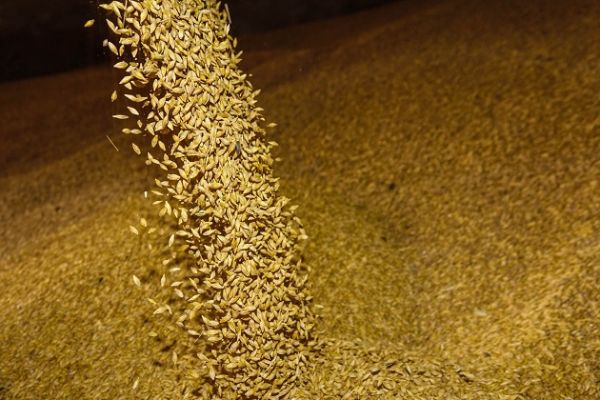