When Will the Fertilizer Prices’ Hike Stop? 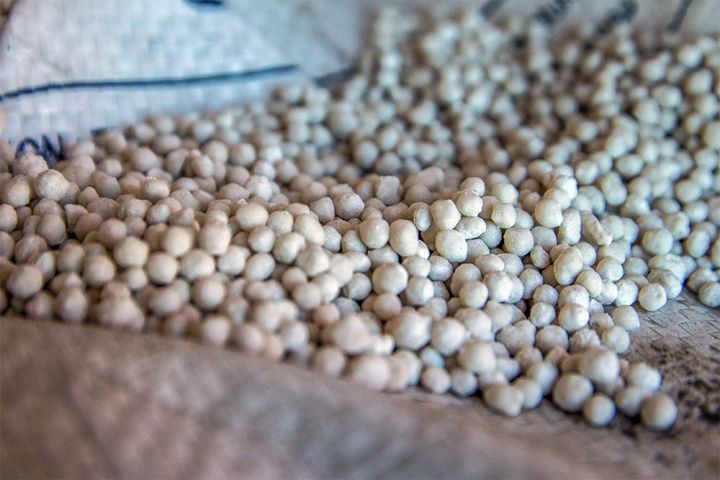 In recent years Ukrainian market has been used to relative stability in fertilizer prices. Therefore, even in November 2020, many opted for seasonal fertilizer purchases compared to emergency ones. Yet at the end of 2020 farmers made a shocking discovery of the fertilizer prices’ surge. In 3 months, the main fertilizers have gone up by 40%. 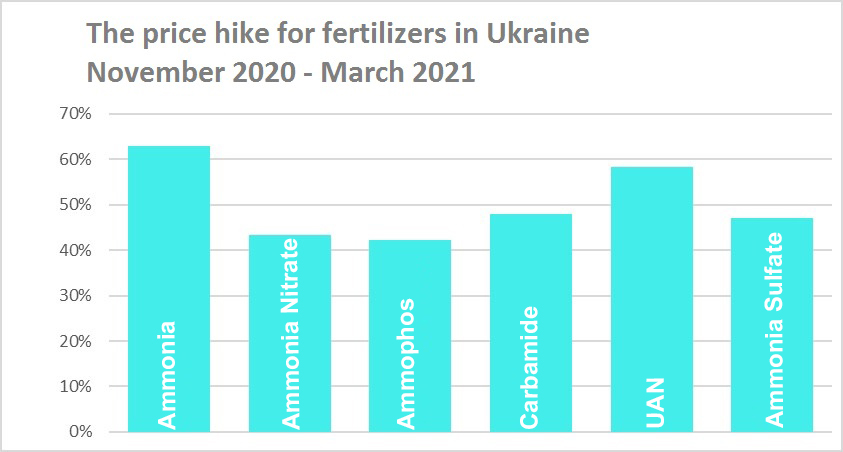 Not only in Ukraine was the prices’ hike noticed. Below you can find two comparative charts of the price for an active substance unit of mineral fertilizers in the global market. As of the 16th of March 2021, the prices’ surge was observed in all segments of nitrogen and phosphate fertilizers. In the price of some products, there has been a decrease in the dynamics, but the major trend has remained stable for 13 weeks in a row. 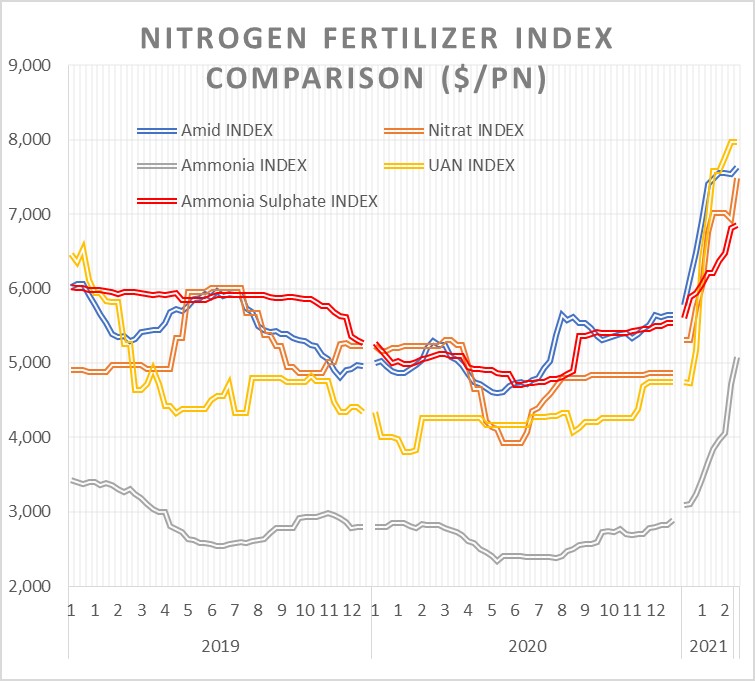 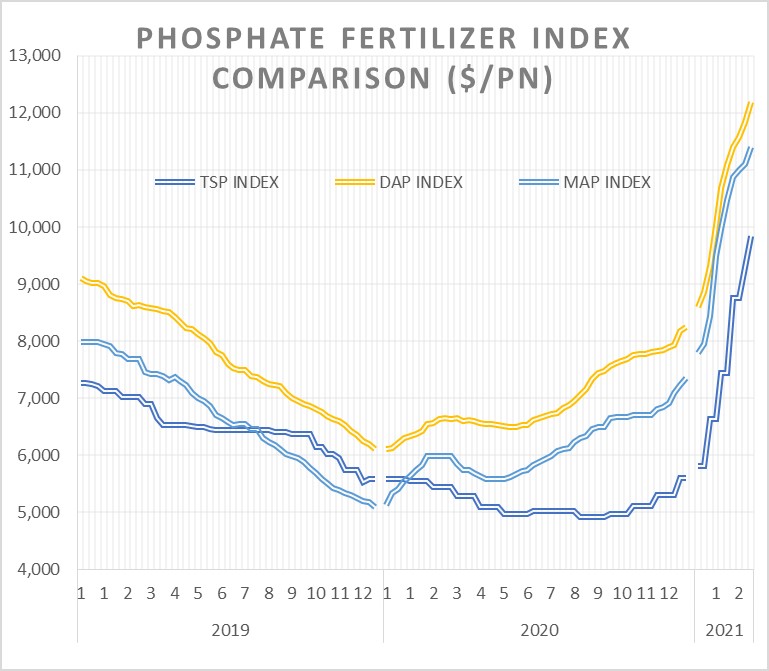 The pattern of growth seemed so steep and, at first sight, unjustified by objective factors, that for some people it rang a bell of 2008. In that year, in a few months, world indexes soared several-fold and then plummeted just as fast.

If these cases are similar, then the likely outcomes are to be expected. For a part of the agricultural community, it presents an opportunity to capitalize on the speculation bubble. For others, on the other hand, it’s a chance to wait and see the return of the previous prices, or their fall even lower. However, we should beware of the simplistic perception of the present based solely on its analogies with the past.

Are These Situations Truly Alike?

What should be pointed out in the very beginning, is that the global market demand for fertilizers didn’t change much at the end of 2020 and at the beginning of 2021. Technological issues did occur in a few enterprises in different regions, but the influence they had on the market was insignificant. The main factor that tipped the balance of the global market scales was the increased demand for fertilizers. To date, on the 16th of March 2021, the demand remained high, while the queues for shipment could vary from several weeks to several months. This is the objective reality that will extend its influence at least until the end of April.

The key factor that triggered the rise in prices in 2008 and 2021 is financial speculation. Excess money supply that ended up in the goods market gradually started flowing between its elements. COVID-19 restrictions have slowed down the world economy. In the meantime, business and population support measures have led to a billions-worth unsecured financial bubble. Merely according to Joseph Biden’s statements, the funding allocated for economic support and fighting COVID-19 will reach 2 trillion dollars. Yet some items that received speculative investments have an entirely real growth base. For instance, agricultural production relies on the decrease of inventories while the demand on the main markets is increasing.

Any imbalance in agricultural production supply may lead to another price hike. And financial speculants have catalyzed the process rather than causing it.

Large procurement of corn by China is an indicative example. A big enough food reserve is required to restore swine stocks that have dwindled due to African swine fever. In 2021, this problem can be solved with the help of import. But in the long run, such a solution may result in implications that go far beyond 2020 and 2021.

In hindsight, when taking a look at the price of fertilizers and produce (based on carbamide, corn and wheat), one can reach a clear conclusion about the interdependency of price dynamics and agricultural production. However, this particular example doesn’t give any evidence of direct correlation. Each market is subject to its own driving forces. The peak of speculation in 2008 and its dynamics coincide in each of the three products mentioned. At the same time, a rise in indicators in 2011-2013 was received with restraint by the fertilizer market. At that point, the material base in fertilizer production allowed it to handle the peak demand.

In tribute to the speculative factor, it must be admitted that the current price dynamics on the market of mineral fertilizers reminds not a spiralling rise of 2008, but rather a price recovery after a prolonged period of decline. Such phenomena could have been observed earlier. On average, the recovery period lasted from 12 to 25 weeks. On the 16th of March, the rise in prices for nitrogen and phosphate group was still noticeable. They have already crossed the maximum indicator for 3 years and approached the average price for 10 years.

Is the global price stabilization in the fertilizer market to be expected in April or May? Most likely, yes. But the level which it may reach is hard to predict. As much as it is to predict the impact of the influx of unsecured money in the global economy. Still, the return to the price of 2020 looks improbable. For that to happen, a whole series of unconnected events has to play out.

Will the inflation of global currencies shape new realities on the world market, including the fertilizer one? Well, financial speculants act as ordinary people when trying to foresee times of instability. They buy tangible assets of monetary value. So, people will not stop consuming food. But the soil, in the meantime, is in need of nutrition. 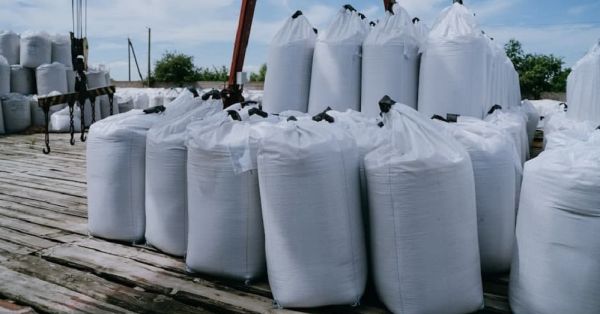