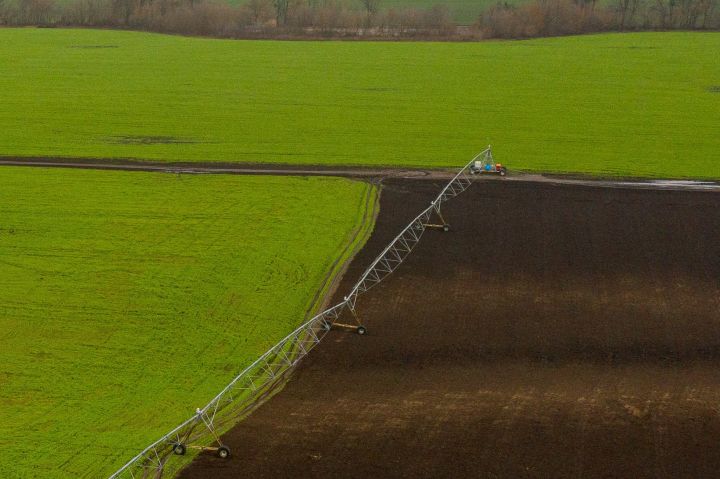 The Latifundist.com team goes ahead with its research on irrigation in Ukraine. In December, we visited Kernel's Prydniprovskyi Cluster, where irrigation has been in place since 2014. The occasion was special: the agricultural holding had just signed an agreement with Variant Irrigation, a Ukrainian manufacturer of irrigation systems, to supply GPRS-enabled irrigation equipment. Until then, only two American companies — Valley and Zimmatic — offered such software in Ukraine, well, in fact not just in Ukraine but globally.

In partnership with Variant Irrigation, we studied how irrigation works in Kernel fields. The representatives of the cluster told us, in particular, how high yields of corn and sunflower can be reached with irrigation, how to pick up irrigation equipment to fit the configuration of their fields and how long it takes for an investment in land reclamation to pay off.

Green light to a Ukrainian producer 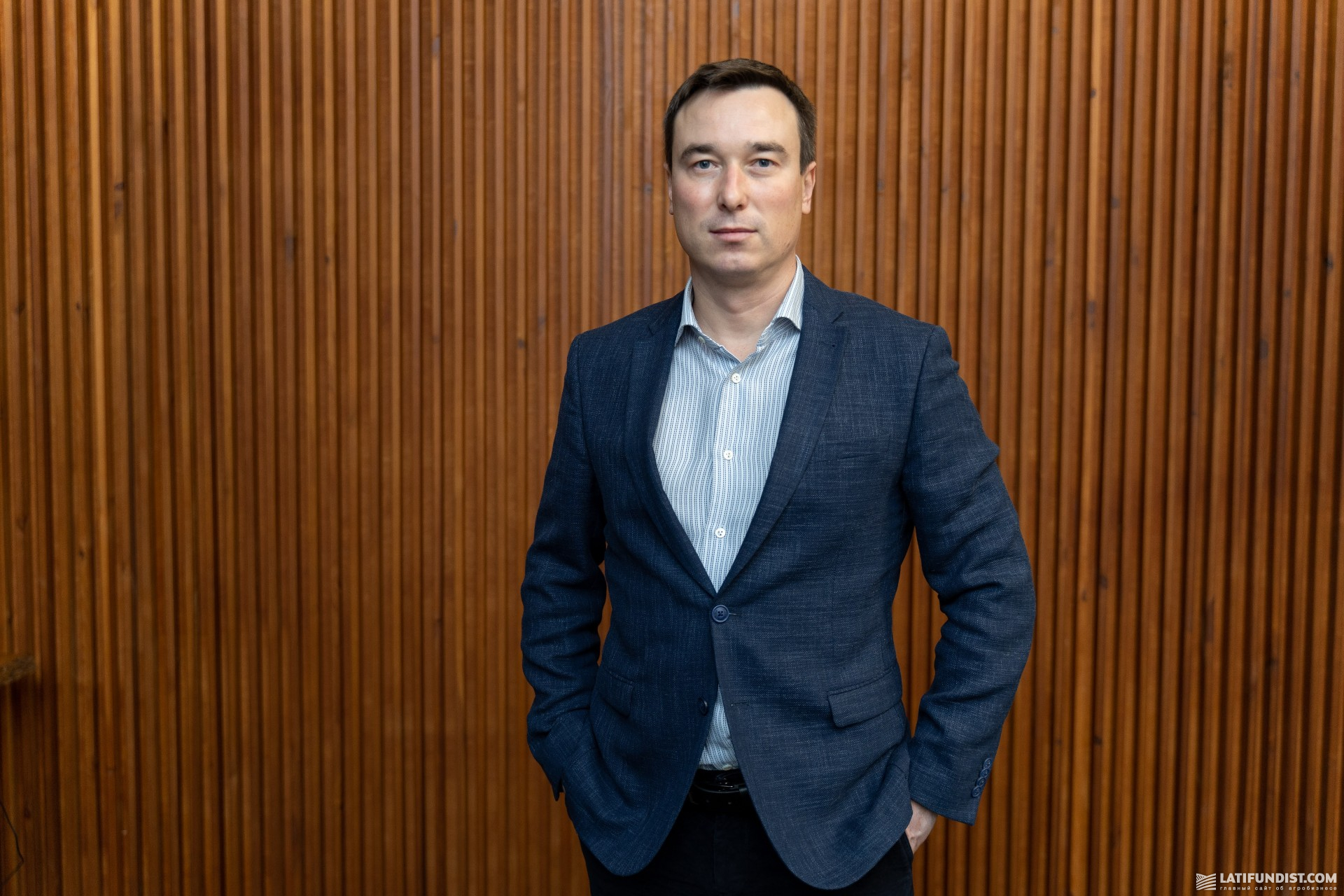 "What does irrigation give us? Firstly, it allows us to make the most efficient use of our seed production area and to obtain a stable crop even in adverse weather conditions. Secondly, it is also a guarantee for our partners, the originators of the crops, that we will complete all production plans," explains Mikhail Petrov.

The irrigation project started in 2014 with 600 ha and gradually expanded to more than 2,200 ha, he says. In 2022, the cluster plans to enlarge the irrigated area by another 600 ha. For this purpose, six linear machines were purchased, two of which are by Variant Irrigation.

Kernel had already heard about this Ukraine-based manufacturer from market colleagues and decided to take a closer look at its product portfolio. After Kernel's management and specialists visited Variant Irrigation's production facilities in Kharkiv, they settled to purchase some of the machines manufactured by the company.

"I advise those who are considering investing in the irrigation machinery to visit the supplier's production facility and talk to the top executives. Fish for feedback from the market. Opinions will vary, but one will still be prevailing, and it is worth relying on this when making a decision. As the head of a Ukrainian company, I am convinced that business should support Ukrainian manufacturing. We believe that Variant Irrigation machines will be just as good, and perhaps even better than their closest competitors from the United States. That's why we gave the green light to a quality Ukrainian manufacturer", Mikhail Petrov comments on the company's choice.

Daniil Shufani, the owner of Variant Irrigation, admits that there is a stereotype among many enterprises today that everything Ukrainian-made is low-quality. But for over a decade the trend has been completely different and Ukrainian manufacturers can deliver a much better quality product than their foreign counterparts. 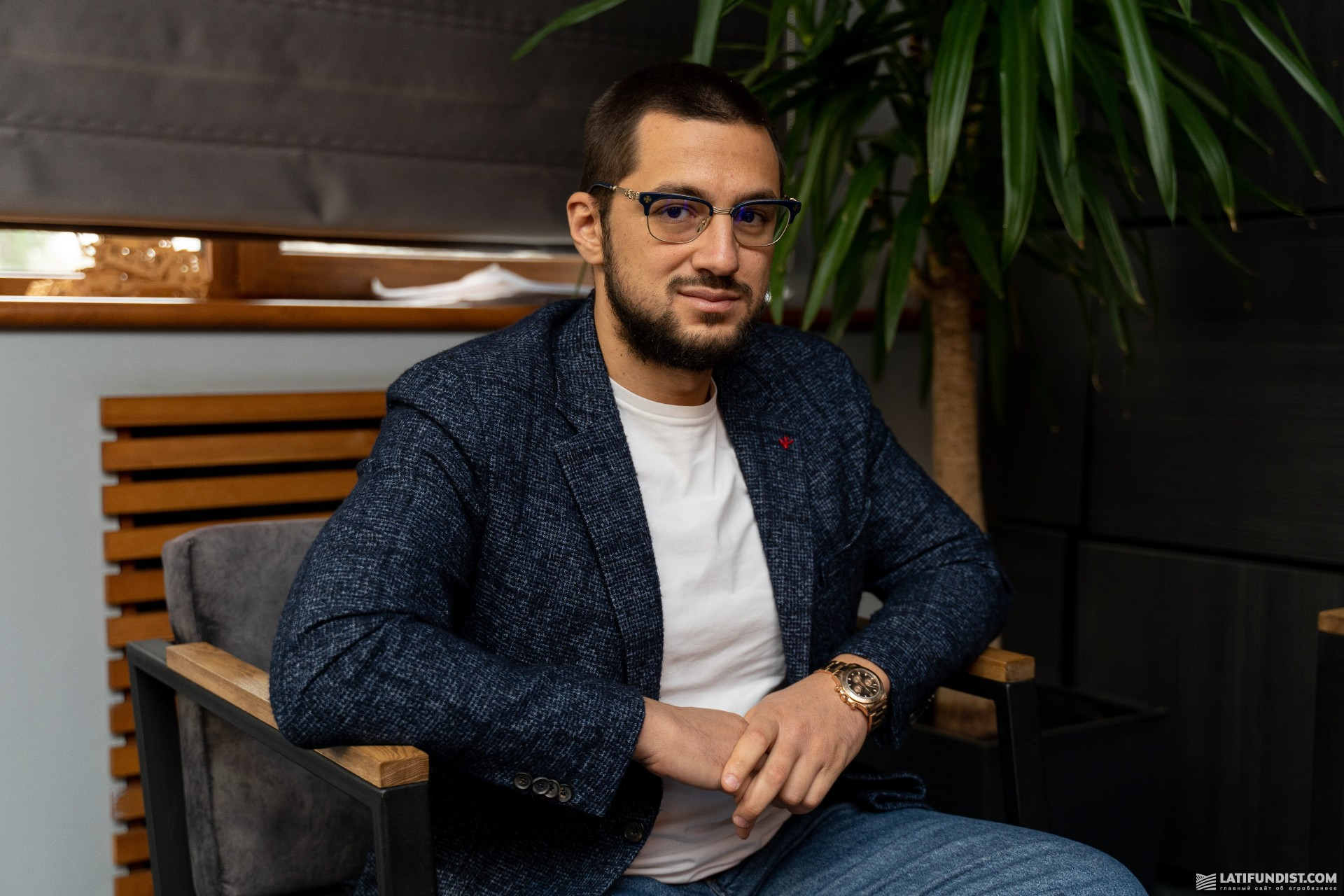 Two 440 m linear machines will be delivered to Kernel in March 2022. This will be the first time that domestic irrigation machines will be equipped with a GPRS system. According to Daniil Shufani, this was the principal request of the customer.

"For Kernel, we are developing software which enables the control of the linear machine via the GPRS system. Worldwide, only two US companies provide this software. We will be the third and the first in Ukraine. We are grateful to Kernel for allowing us to carry out this experiment in their cropland," adds Daniil Shufani.

What is the system's trick? Oleh Kovalchuk, the head of the Prydniprovskyi Cluster's irrigation department, says that the human factor is often the reason why linear machines break down. 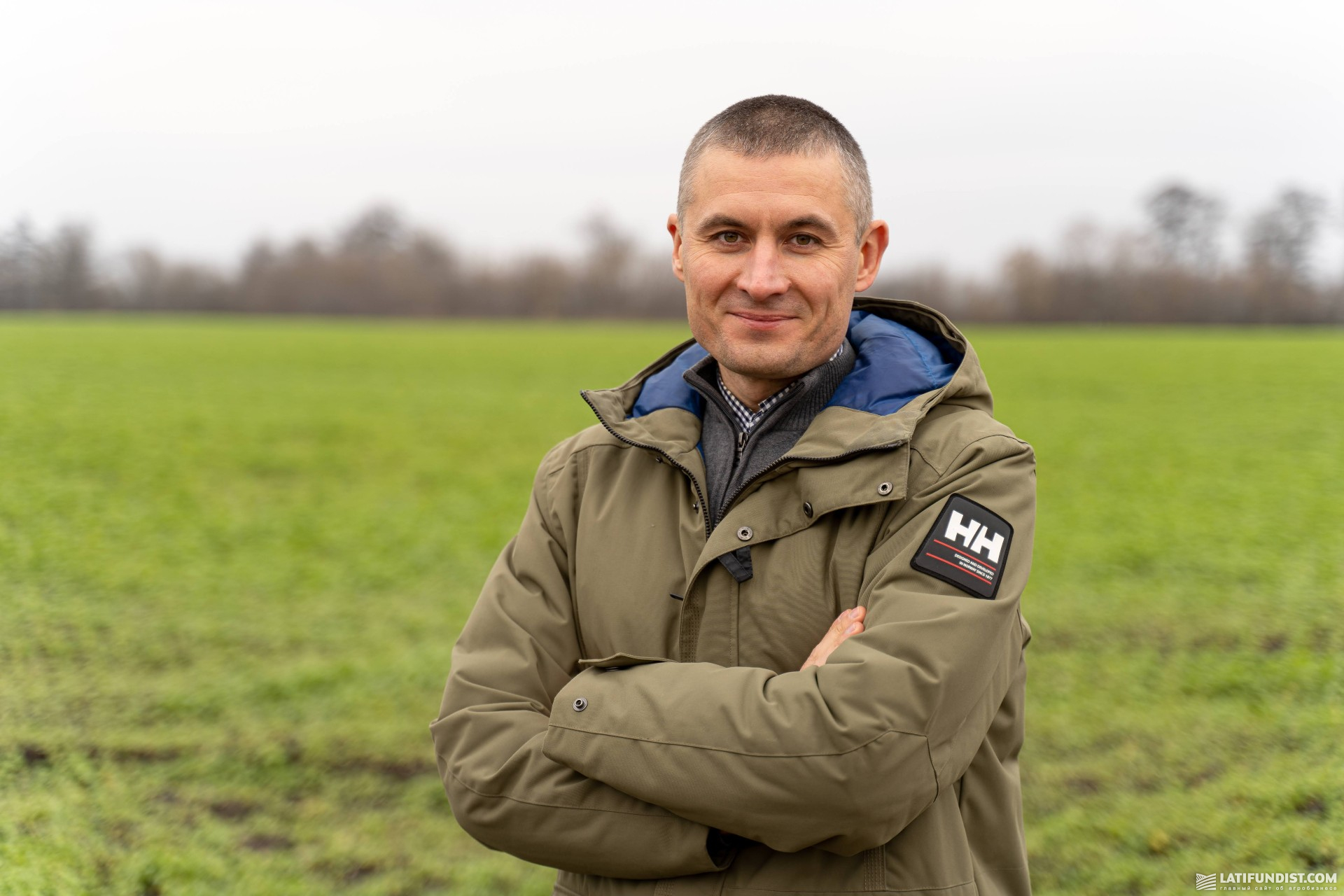 "Incidents occurred when the operator was engaged in something, the machine ran into a forest strip and flipped. This resulted in twisted metal constructions and a machine no longer ready for work. Besides, the linear machine drives through ditches. The flatter the ditch is, the smaller the damage to the machine is. If the ditch is uneven, electronic parts, such as the motherboard and sensors, may be out of order and fail to align the machine's position. If it is not equipped with electronics, the reduction gear may be damaged," describes Oleh Kovalchuk.

He adds that once GPS is installed, there is no need to align the machine to a ditch or with a cable. In addition, the GPRS system ensures accurate and efficient irrigation, as the operator is always aware of the location of the equipment.

"Have you chosen Variant Irrigation for its cost is partially compensated by the state?" we ask Mikhail Petrov. He agrees that this is a "nice" argument, but hardly the decisive one.

At present, the maintenance of the irrigation machines is critical for the cluster. So when selecting a supplier, the main concern is how the service is set up, where the service teams are located and how well staffed they are. 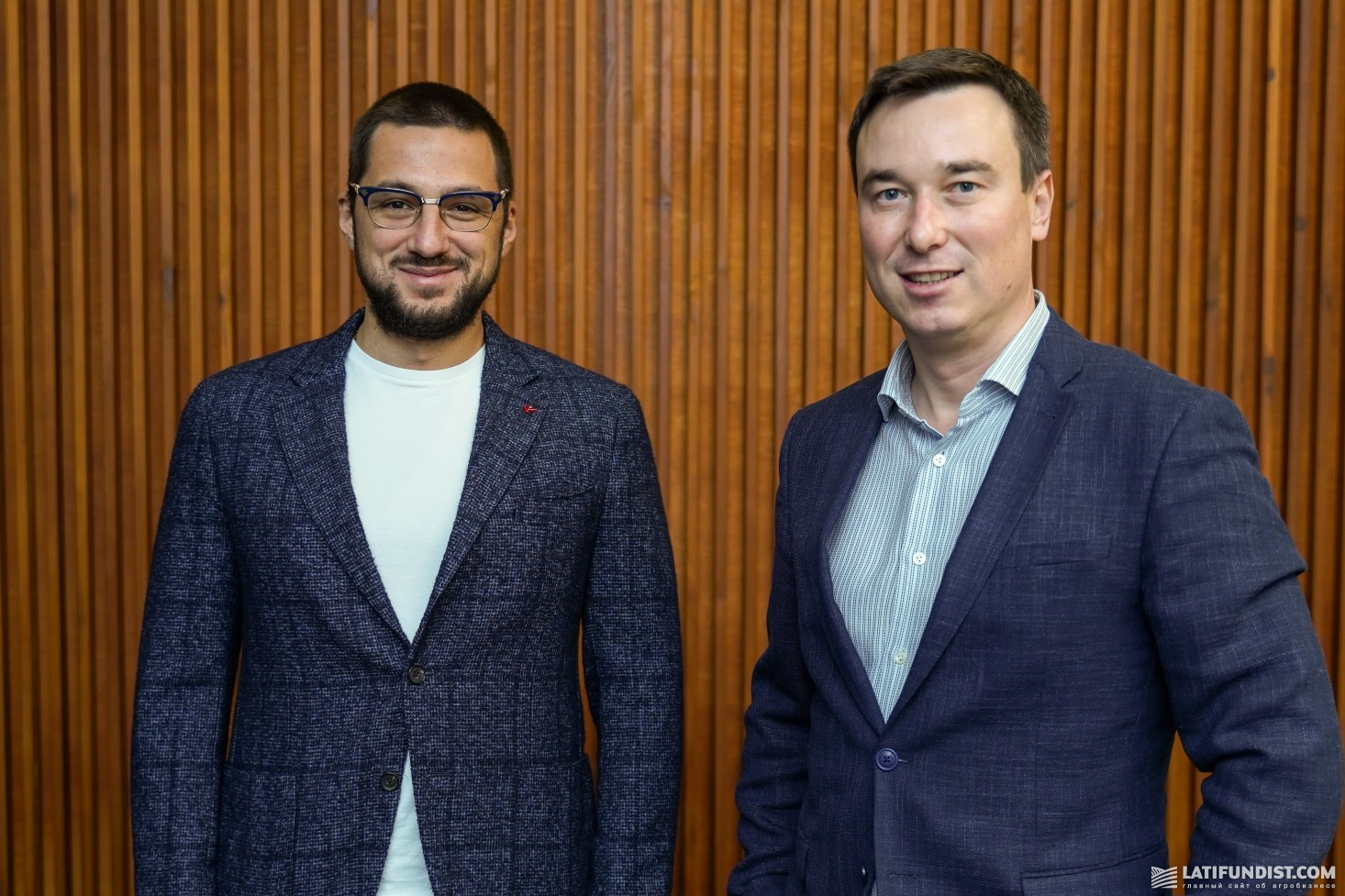 Daniil Shufani assured that there would be no problems with it. This year the company boosted its service and supervision of the equipment installation. Variant Irrigation opened a customer service centre in Melitopol of Zaporizhzhya region, where all service issues can be solved within one day. There is also a warehouse with spare parts and an office where one can order a turnkey project.

"We assign priority to service as we understand that downtime in the season is the biggest problem for agricultural companies. Every year we expand the staff of service teams, provide them with vehicles and the necessary tools. We do everything to keep the crews mobile," says the owner of Variant Irrigation.

The agreement is ready and we have time for an excursion in the cluster. Together with Oleh Kovalchuk, we go to Dmytrivka village in Cherkasy region, where the office of the irrigation department is based. He says that 4 operators and 34 hydro technicians are employed during the season, from April to October.

Once irrigation was in place, Kernel focused on how to digitalize the process. The machines were equipped with GPS trackers and a control centre was set up, which monitors and controls the operation of all the irrigation machines in Dmytrivka and Brovary. It means that the operator watches in real time whether the machine is working, where it is located, what distance it travelled, how much fuel was consumed. Some of the machines are equipped with water meters, so the operator receives data on how much water is used in a separate field. 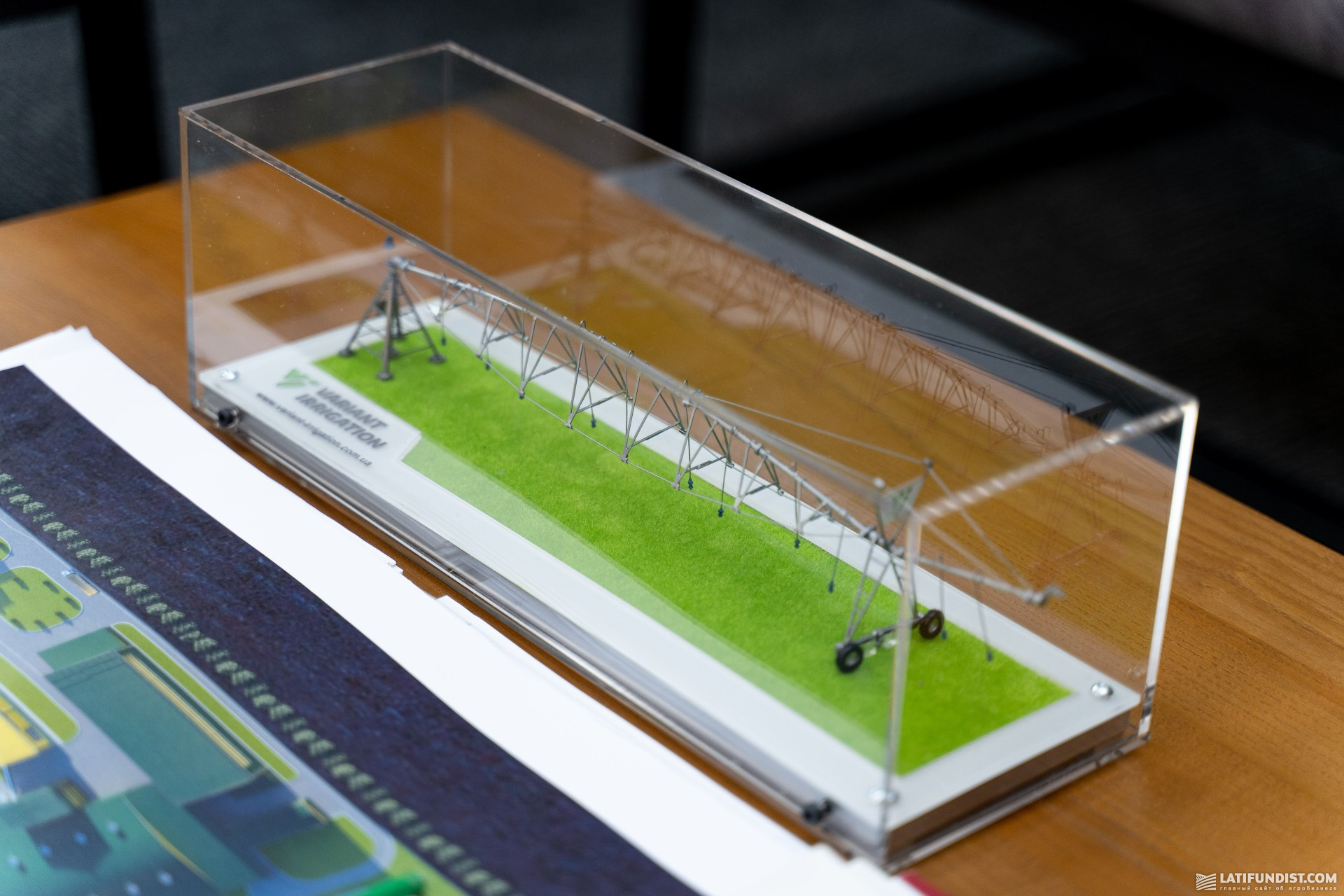 By the way, it is sourced from the Kremenchuk water reservoir. The amount of water required per hectare of irrigated crops is determined by the agronomic service. The cluster has specialists who calculate the irrigation norm on the basis of soil sampling. For this purpose, there are 1-4 points in each field where the soil is sampled for analysis. The cluster currently has 22 irrigation machines, and soil is taken from 43-50 points during the season.

According to Oleh Kovalchuk, in the future, when the pivot irrigation machines are purchased, they will probably use sensors for soil moisture to fully automate the irrigation system, but there is no particular need to do so now.

Moreover, the configuration of the fields allows only the use of linear machines.

"The fields in this region have a rectangular shape. If we install pivot machines, only 60% of the area is covered. But the linear machine runs along the field, covering the entire width of the field, so there is practically no dry soil left on the regular rectangular fields. We also produce seed corn and thus we have to be sure to have 300 m of clearance to avoid pollination by a neighbouring hybrid. In these areas we plant soybeans, rapeseed and winter wheat. Everything beyond the isolation zone should be irrigated as much as possible. Linear machines do it perfectly," explains Oleh Kovalchuk.

The cluster's first irrigation system cost USD 1,500 per hectare. Investments in the last one will amount to USD 1,800. The costs are not high at all because the region already had water distribution systems built during the Soviet times. The pumping station and the pipeline itself have been preserved. 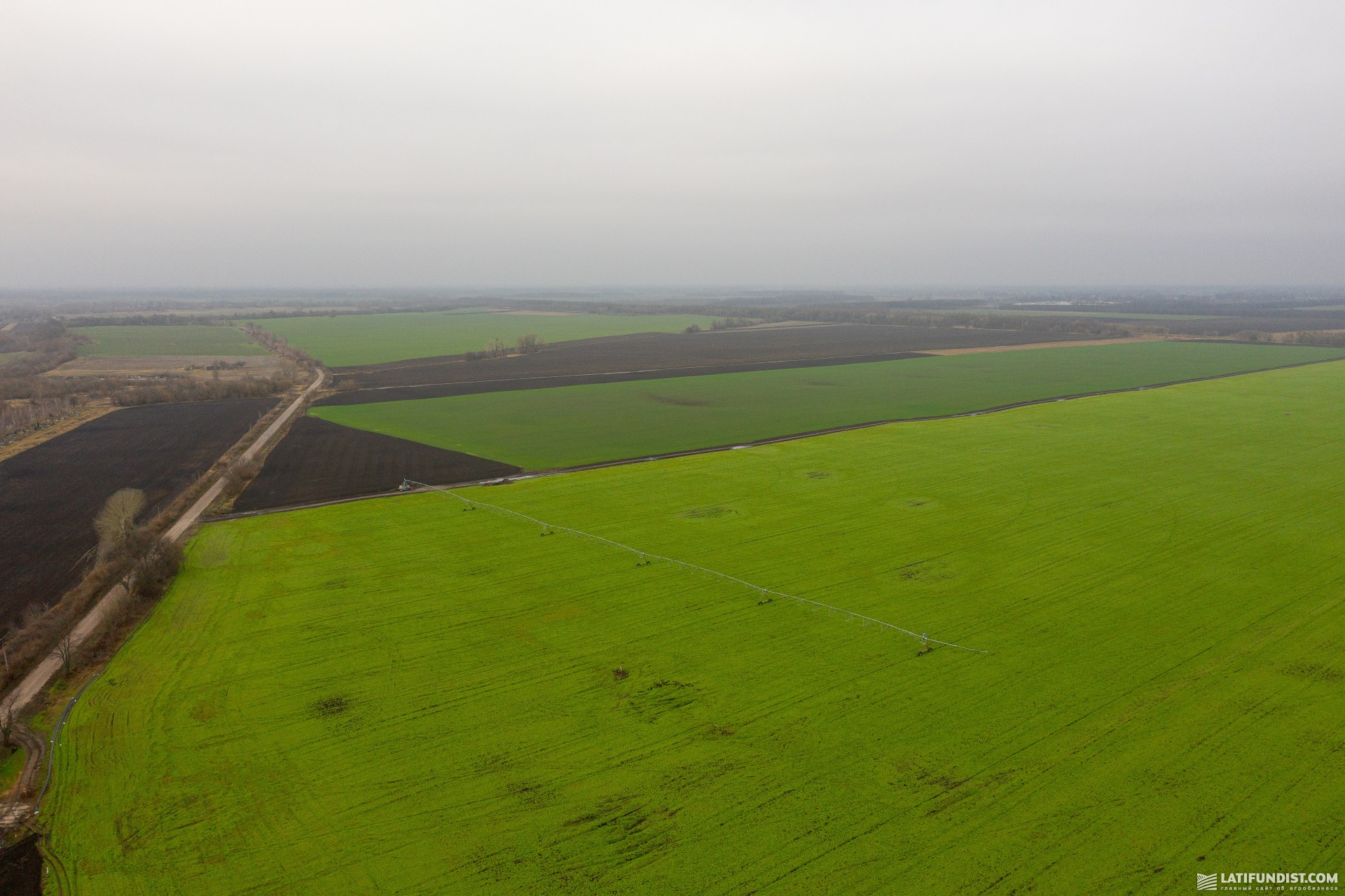 Oleh Kovalchuk is developing this project entirely by himself. He studied at the Hydromelioration Department of the Rivne National University. He also designs the project using special software, calculates the required number of machines and their technical parameters.

"How do I get the technical data for a spraying machine? If the area is 100-120 ha per machine and the spreading rate is 5 ml/ha, then the machine's consumption is 75 l/s. It must be 480 m long, nozzles are also selected. Once we do the math, we will hold a tender for the purchase of machines on Kernel's tendering portal," explains Oleh Kovalchuk.

At present, the Prydniprovskyi Cluster has 2.2 thou. ha of irrigated sunflower and corn hybrids, winter wheat, soybeans and rapeseed.

According to seed production agronomist Serhiy Darmohrai, yields from irrigated farmland depend not only on the crop but also on the variety, hybrid and weather conditions that prevailed during the growing period. For example, last year the crop yields in the Prydniprovskyi Cluster were three times higher. In sunflower these figures are a bit lower, though the yields are potentially 1.5-2x higher in irrigated fields. 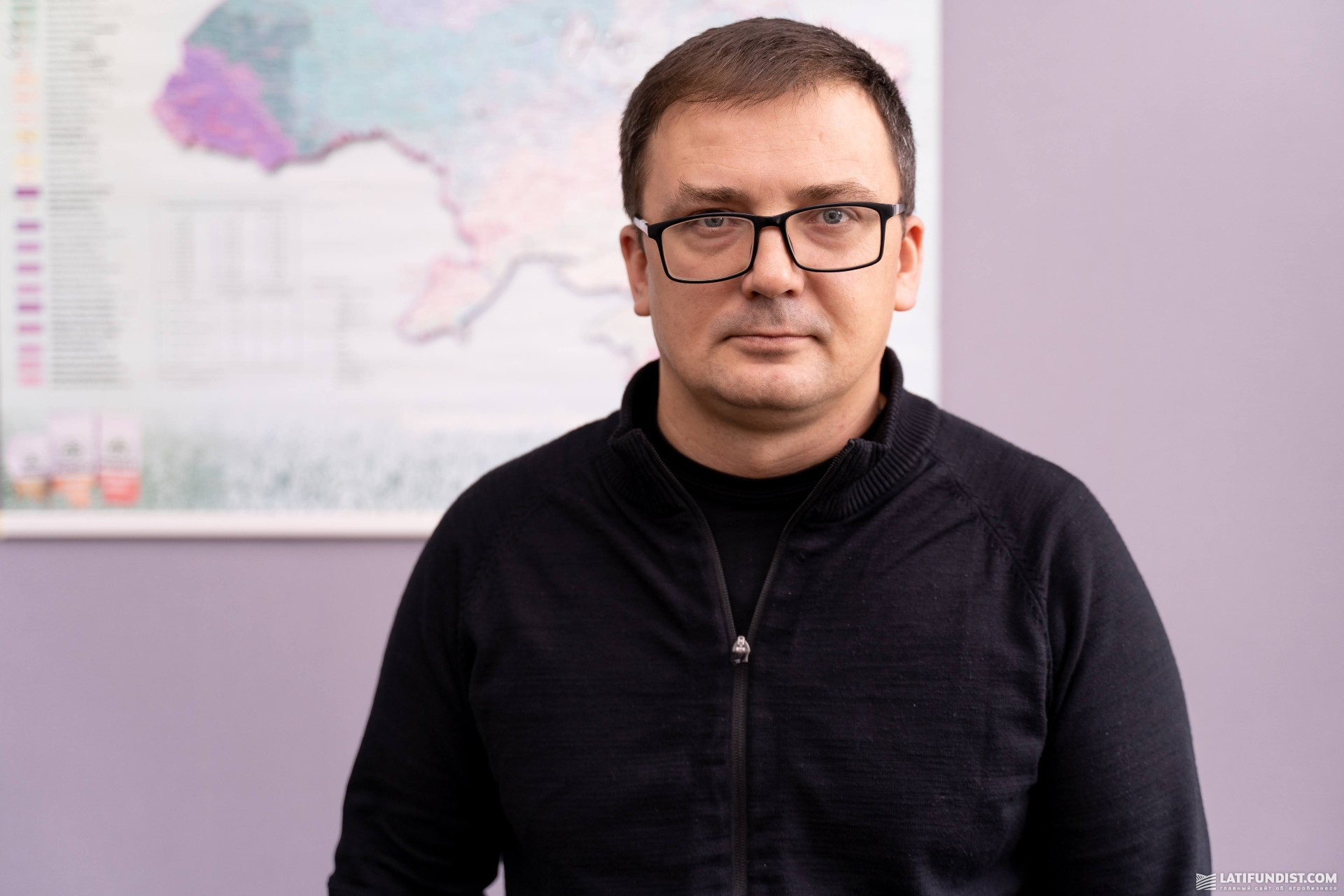 Serhiy Darmohrai notes that weather anomalies have become more common over the past few years.

"The climate is changing and we are forced to adapt to it. This year's autumn weather pleased us. There was enough precipitation, so we irrigated only 50% of the areas to ensure winter crops emergence. By comparison, we did this in 100% of winter crops areas last year," says Serhiy Darmohrai.

Return on investment in irrigation

The geography of supplies of irrigation machines is expanding, marks Daniil Shufani. If previously it was mainly concentrated in the eastern regions, now agrarians in Khmelnytsky, Vinnytsya and even Chernivtsi regions are switching to irrigation. 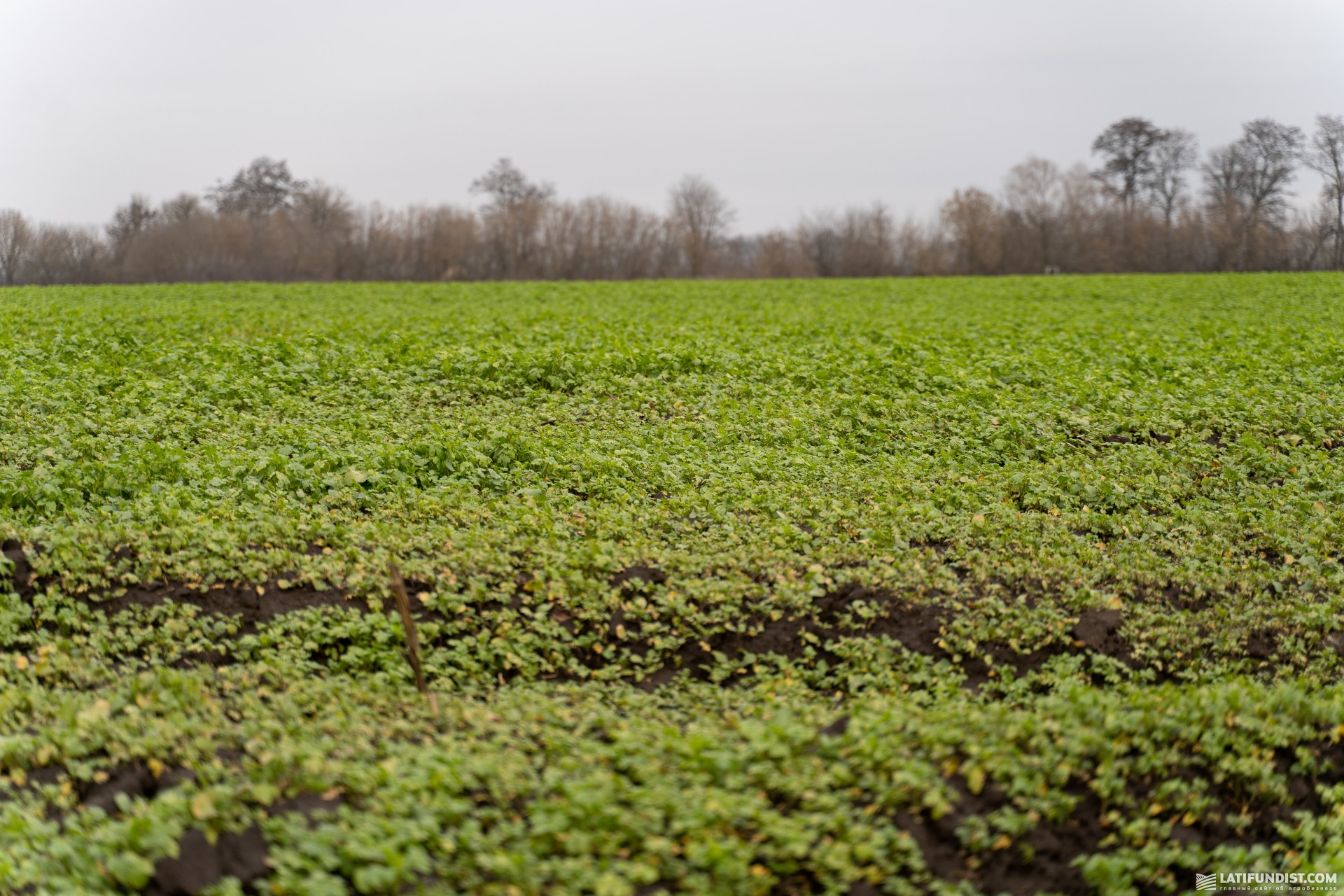 Obviously, every producer expects to achieve various effects from irrigation. Depending on the region and the crop, some want to increase yields, others to increase grain quality or to protect themselves during critical periods of crop development. 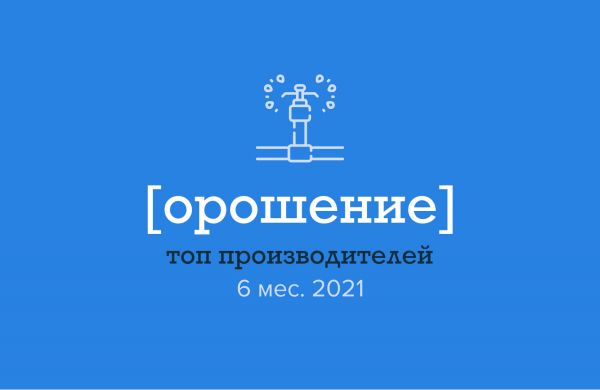