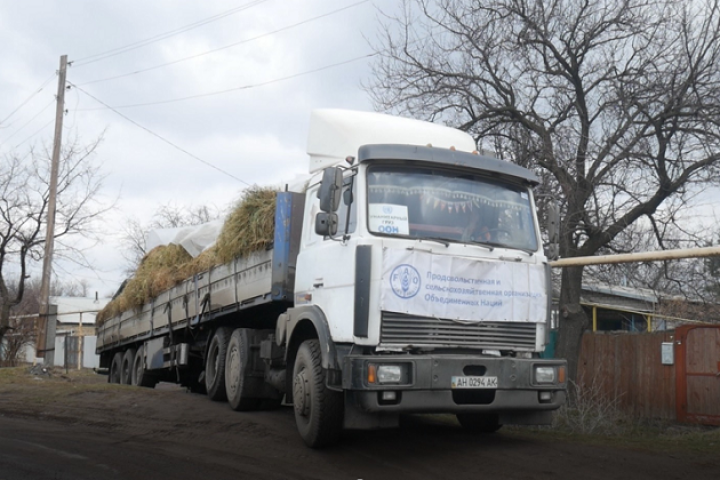 FAO continues to deliver a humanitarian aid in the conflict-affected eastern part of Ukraine, with the focus on rural people living along the engagement line. This time, 68 households are receiving up to 55 tonnes of hay, for an average delivery of about 800 kilos per family.

Distribution of the fodder is taking place in five villages – Dacha, Zhovanka, Bakhmutka, Peski and Mayorsk – during the period from 17 to 22 March.

This is the second wave of a larger program. Earlier shipments were made in 10 villages of the Luhansk and Donetsk regions, with almost 50 tonnes of chicken feed distributed among 500 households.

The actions are part of a Humanitarian Response Plan within the coordinated United Nations response to the ongoing conflict.

By the end of the spring 2017, FAO’s emergency team in Ukraine expects to distribute rabbits, rabbit cages, seeds for feed production, ducklings, beekeeping kits, and other farming inputs.

“This is a critical time for Ukraine, so we see a vital need to deliver aid for vulnerable households to keep their farming activities functional,” said Farrukh Toirov, coordinator of the emergency response programme in Ukraine.

“FAO contributes to sustaining people’s food security and avoiding additional economic losses. In addition to improving their own consumption, assisted families can contribute to increasing the availability of meat and milk in local markets,” he added.

FAO’s emergency project is financed by the Government of Canada. Overall funding is valued at US$ 2.3 million, and is aimed at enhancing food security for more than 45 000 people residing along the contact line in eastern Ukraine.