Bayer-Monsanto Deal: Risks and Prospects 'Deal of the Century'

What is known about the deal?

Pharmaceutical, chemical giant and an important global player in the crop protection market, the German company Bayer, for many months, making an effort on buying an international leader in plant biotechnology — an American company Monsanto. Currently, Bayer’s management is in an advanced stage of negotiations with representatives of the American corporation. Bets and agiotage surrounding this deal continues to grow. Recently, the German company raised the price to $ 65 billion. If the parties agree this time, it will be a 'deal of the century', which will lead to the creation of a leading integrated platform in the global agricultural market with a broad portfolio of products. At the moment, the Monsanto’s management continues to conduct financial and advisory work, time after time rejecting Bayer’s offers. 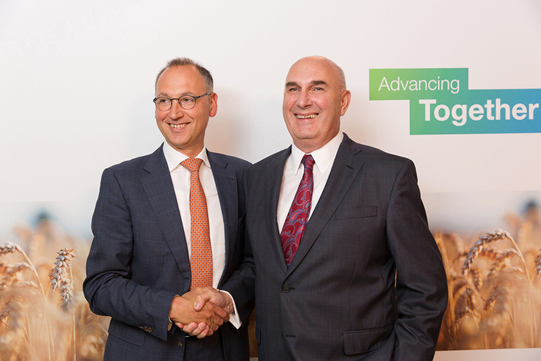 What is the chronology of the deal?

19 may 2016, Bayer has put forward the first proposal to purchase Monsanto in the amount of $122 per share, which in total sum was about $62.2 billion.

Analysts from Citigroup Inc. Peter Verdult and Andrew Baum said that they would be very surprised if the offer from Bayer would be successful. What was said, what happened. Bayer received refuse up on its offer. After that company began to conduct backstage negotiations with Monsanto’s management. After reviewing with the additional information, comparing all pros and cons, the German company raised the price to $125 per share.

On July 14, 2016 the total proposed sum was about $ 63.5 billion. Without thinking twice, the Monsanto’s management once again rejected offer of the German company. It was surprising for many Bayers’ shareholders, since, in their opinion, the first proposed sum was too high.

September 5, 2016, Bayer announced about further negotiations with Monsanto and willingness to increase its offer to $ 127.5 per share. Total sum was about $ 65 billion.

Read more: Bayer raised the price of Monsanto to $ 65 billion

Why Bayer’s shares have fallen in price in the summer?

At the end of May 2016 Bayer’s management refused to give any comments to the media about the agreement with American partners.

'It probably won't come as a huge surprise that I'm gonna start with a legal disclaimer. And I have to point out that this is actually our standard legal disclaimer. And the reason behind that is, assuming of course that you're probably even better informed than I am about the stages of negotiations with Monsanto. We have an agreement with Monsanto that we are not going to come public, because that involves various commitments. So, I will not and cannot comment on the transaction at this point of time. I ask for your understanding', — Liam Condon. 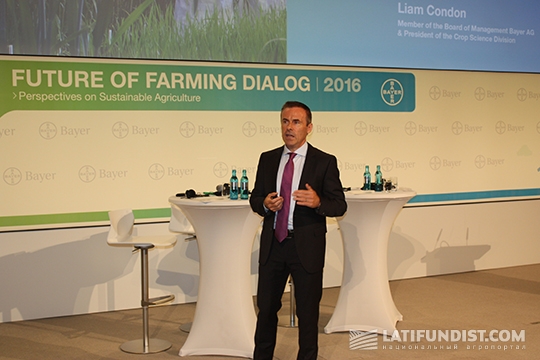 It provoked a wave of negative reaction and various 'conspiracy theories' in the information space on the possible deal. As a result, the company's shares fell to 5.6 percent to 84.47 euros (the lowest index since October 2013). After this incident, the German company's press service actively began to inform the media about its future intentions.

What opinions about the upcoming deal are present on the market?

With the fall of Bayer’s shares shareholders began to think about the expediency of the deal. They feared that making the deal negatively effect on the strategy and the financial balance of the company as a whole. 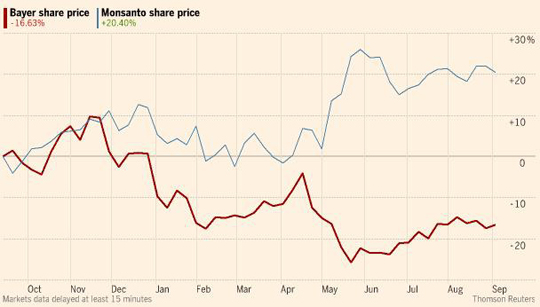 The opinion of some Bayer’s shareholders is still negative. Chief Executive Officer Werner Baumann could not stay aside.

'We are utterly convinced of the rationale of the purchase of Monsanto', — said Werner Baumann to shareholders.

'After the first rejection of Monsanto, Bayer’s CEO now has to fight a battle on two fronts, negotiating a deal with Monsanto while also trying to keep his shareholders', — said Erik Gordon, professor at the University of Michigan's Ross School of Business.

'I believe that, examining the Bayer offer, the Monsanto’s management compares proposal of ChemChina, who earlier this year valued Syngenta at more than 16 times earnings before interest, taxes, depreciation and amortization, at the time when Bayer’s suggestion exceeds Monsanto’s EBITDA at 15.8 times. A similar multiple means Bayer would need to offer $145 a share for Monsanto. Perhaps this is precisely the number Monsanto’s management needs', — said Susquehanna Financial Group analyst Don Carson.

'The disclosed price is at top end of the limit and just about works out. Should it rise any further, which appears probable, the takeover will become increasingly unattractive', — said Markus Manns, who oversees almost $300 million at Union Investment GmbH, including Bayer shares, when Bayer made an official offer to purchase Monsanto for $ 62 billion.

Looking toward the future: how the deal will affect on the Bayer?

Let us imagine two possible scenarios of development of the situation after the purchase of Monsanto.

Company management process can be complicated.  'In general market participants think the more diversified the firm, the harder it is to manage', — says an expert on mergers and acquisitions Michael H. Grote.

After analyzing the market of pesticides import, the average share of Bayer for 2015/2016 marketing year fluctuated around 10-13%, and Monsanto from 3.5-5%. The expert believes that having bought Monsanto, Bayer will be able to take the share of American companies in the Ukrainian market of plant protection products.

At the same time, he notes that merging with Monsanto, the German company will be able to reach the second position, having overtaken BASF in this case. If Syngenta does not maintain its marginality in Ukraine, Bayer will be able to get the lead.

If the share of the seed market Monsanto will go to Bayer, the German company will increase the realization of herbicides on corn. In this way, the Bayer will increase its client group.

The expert noted that the company's price policy is likely to remain the same. Perhaps, the company will create an additional production line.

What will actually be a saturation of the market in case of making a deal is not yet known. We can only guess. One thing is for sure, the quality of company’s goods will not change, as Germany and the United States are the countries with the high standards.