TOP 10 Rapeseed Exporters from Ukraine in 2018

The past year was a bumper one both for rapeseed exporters and corn exporters from Ukraine. However, by the sum of five criteria — crop areas (1 million hectares), yield, productivity, export volume, profitability — Ukrainian agrarians and exporters completed the year 2018 with an excellent result, but not outstanding.

According to the State Statistics Service of Ukraine, rapeseed production last year stood at 2.75 million tons (including private households, but agricultural enterprises hold the lion's share of 2.72 million tons), the average yield amounted to 2.65 tons/ha. Thus, the result of a decade ago has retained the status of the best one. 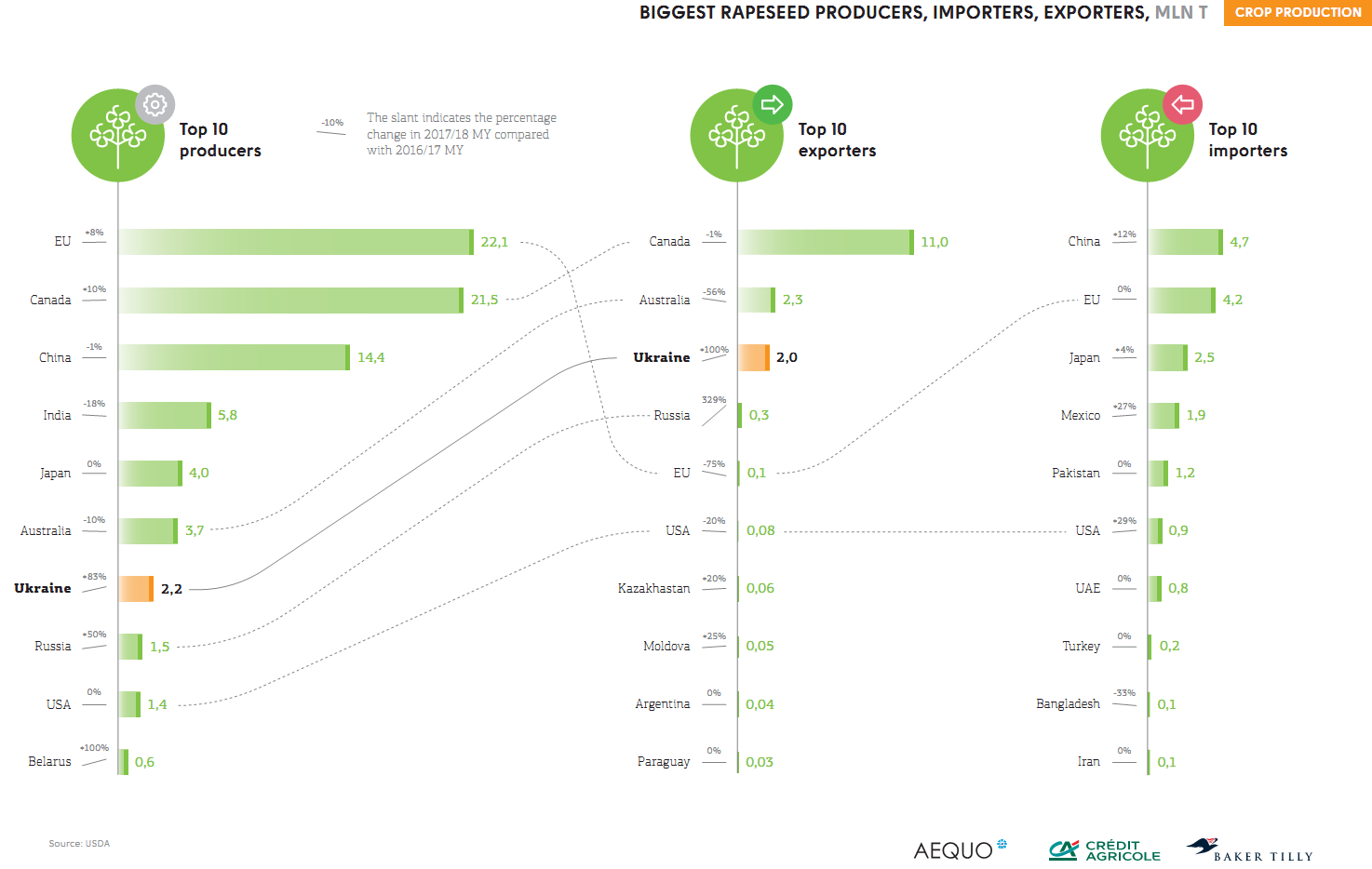 In terms of yield, the past season's 2.79 t/ha gave way to 2017. As for profitability, according to the State Statistics Service, the average sale price of one ton of Ukrainian rapeseed to the foreign market in 2018 was USD 413.9, and the total turnover stood at USD 1.01 billion. This is slightly better than the 2017 result of USD 411.7 per ton, yet it is far from a record. 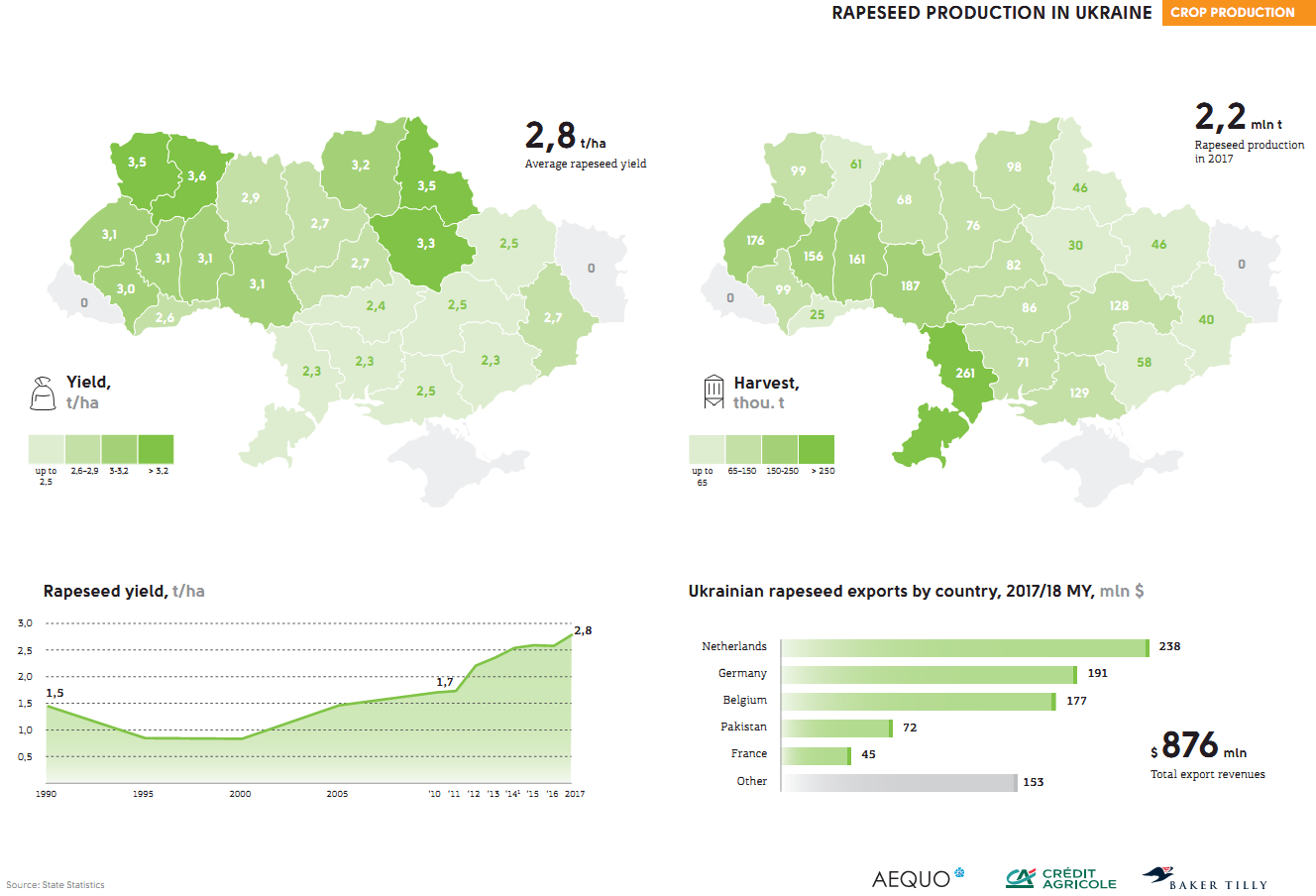 In fact, rapeseed is a special crop for Ukraine. Today, in the world market, the share of Ukrainian rapeseed in the export segment is 14-15% of the total (according to the March report by the USDA, in 2018/2019 the total export volume of rapeseed in the world should reach 17.1 million tons vs. 16.1 million tons in 2017/2018). Ukraine is currently one of the three largest rapeseed exporters. Canada exports a lot more and has equal neither now nor in the foreseeable future — by the USDA projection, the country will supply 11.6 million tons in 2018/2019.

As for the geography of rapeseed exports, Europe is traditionally the main destination for Ukrainian companies. It is natural since the Old World is one of the key importers of rapeseed. According to the USDA updated projection, the European states will import 4.5 million tons of rapeseed in the 2018/2019 season, 200 thou. tons more than previously forecasted. 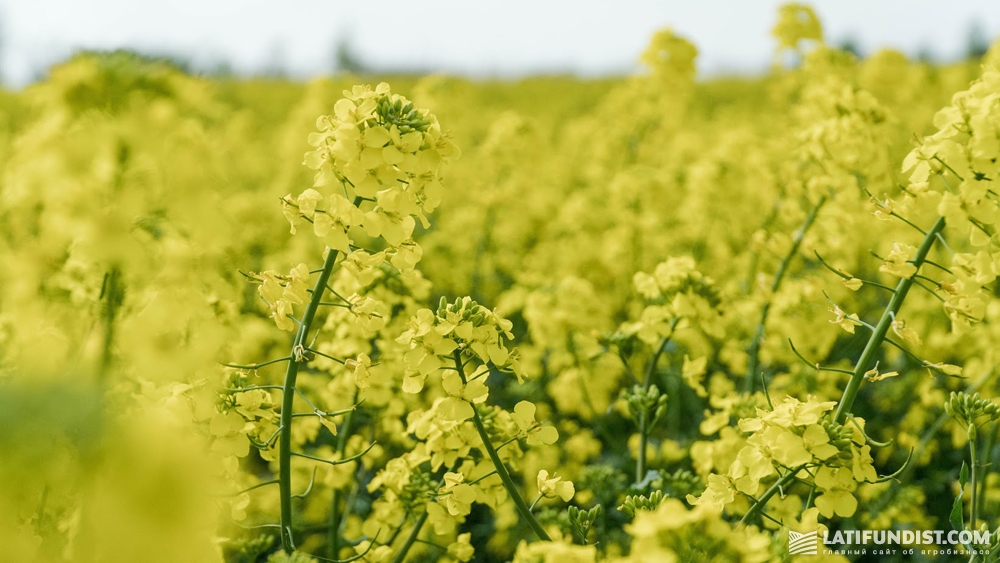 In 2018, Ukrainian exporters supplied 2.14 million tons of rapeseed to Europe (87.7% of the total rapeseed exports from Ukraine), that is, almost half of the rapeseed imported by the European states. Last year, the European vector for the export of Ukrainian rapeseed manifested itself most clearly — six EU states are the major importers of the product.

Germany imported the most — 732 thou. tons, Belgium — 697 thou. tons, while France imported even less — 319 thou. tons. These three countries imported 71.6% of Ukrainian rapeseed. However, this “big three” is rather situational. In 2017, for example, the Netherlands dominated the supply of rapeseed from Ukraine. In 2018, exports to the Netherlands, Poland and Portugal amounted to 99-172 thou. tons. Ten years ago, in 2008, the structure of rapeseed exports from Ukraine to Europe was quite the same. Only the countries of the "big six" were accompanied by Hungary, Latvia, Lithuania and Greece. 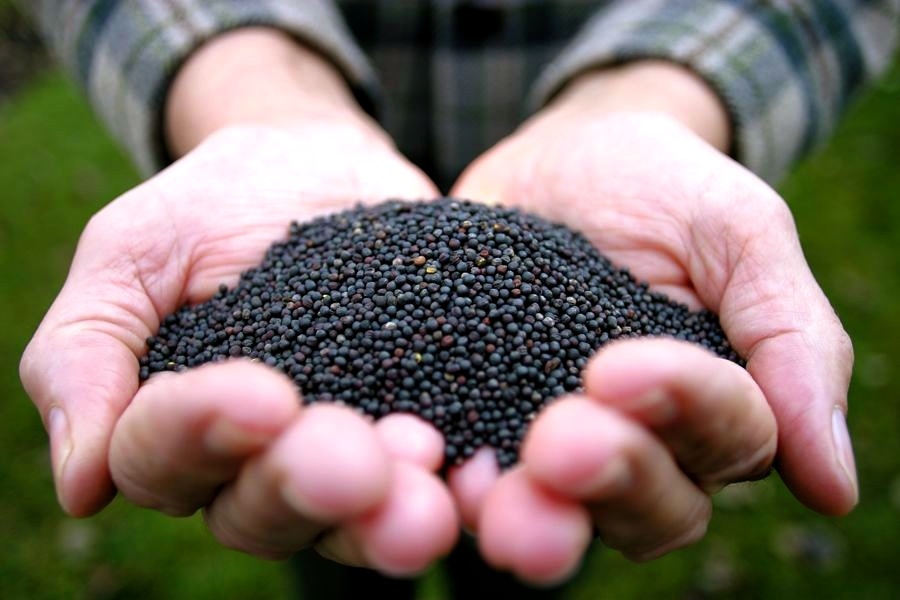 Another important for Ukraine direction of rapeseed exports is Asia (in 2018, exports totalled 252 thou. tons). The key buyers are Pakistan, the United Arab Emirates, Israel and Bangladesh (rapeseed supplies in 2018 amounted to 28-97 thou. tons). Last year, a significant increase in shipments to the American continent from 2.1 thou. tons to 47.6 thou. tons was a surprise. At the same time, both Mexico (42 thou. tons) and the USA (5.6 thou. tons ) — entered the TOP 12 of the largest importers of Ukrainian rapeseed.

On the whole, the twelve above mentioned countries purchased 99.65% of rapeseed exported from Ukraine.

And finally, a few words about the TOP 10 exporters in 2018. There were no significant changes in the rating. The increase in shipment volumes and the actual monopolization of the market by the largest companies was a distinctive feature of the past season. As a result, the share of the five largest market players in 2018 amounted to 97.9% of the total rapeseed volume exported from Ukraine. The share of the all-time leader, ADM Trading Ukraine, is around 40%.

From this feature of the past season, another one follows — only five companies in 2018 managed export volumes above 80 thou. tons. All other participants of the rating delivered rapeseed abroad in much smaller volumes. As a result, the barrier for entering the second five of the rating has dropped to rather moderate volumes. If the previous seasons the export volume of 50 thou. tons was the benchmark, now five thousand tons guarantee an honourable place in the not-so-big “team” of rapeseed exporters from Ukraine.

The rating was compiled from the data of agents in Ukrainian ports, which is slightly different from that of the State Statistics (2.16 million tons instead of 2.44 million tons). However, this does not influence the overall picture since the rapeseed deliveries by the largest operators reach hundreds of thousands of tons.

Rapeseed is a key export crop for ADM Trading Ukraine, a subsidiary of a U.S. based Archer Daniels Midland Company. However, in absolute terms in 2018, rapeseed holds the second position in the company's export portfolio. ADM Trading Ukraine exported 2.1 million tons of corn, 2.5 times more than rapeseed.

The export of rapeseed brought ADM Trading Ukraine an even greater income than the export of corn.

ADM Trading Ukraine in recent years has consistently led the top ten and with a large margin. In some periods, other large companies dominate the rating, like NIBULON, but in terms of annual and seasonal indicators, ADM has virtually no competitors.

Last year, the company substantially increased its rapeseed exports — by 55%, according to analysts. For comparison: in 2015/2016, the share of ADM in the total volume of rapeseed exports was 19.2%. Over the last three years, the company has almost twice improved its position in the market.

For Cargill, a subsidiary of U.S. based Cargill in Ukraine, the second place in the top ten exporters of rapeseed is ordinary. This crop is one of the two key Cargill export crops in Ukraine. The second one is wheat. Although the share of rapeseed in the total volume of the company's export deliveries accounts for about 30%, while the share of wheat is about 70% (in 2018, the trader delivered to foreign markets 2.2 times more wheat than rapeseed — 1.3 million tons), in terms of value, rapeseed is the number one crop for Cargill.

In recent years, Cargill has significantly strengthened its position in rapeseed deliveries. In 2015/2016, the company's share in total exports was 18%, that is, over the past three years, the increase in rapeseed supplies abroad reached 10%.

At the same time, the company has the potential to further increase the export of rapeseed. The construction of a high capacity grain terminal in the port of Yuzhny (Odesa region) with a designed annual storage capacity of 5 million tons is currently being completed. This is a joint project of Cargill and M.V. Cargo. The construction works started in 2016, and the grand opening of the terminal is scheduled for May 2019. But in fact, it is already put into operation.

In 2018, Glencore Agriculture Ukraine, a subsidiary of a Swiss-based Glencore, exported 2.15 million tons of corn, barley, soybeans and rapeseed. The share of rapeseed in the total supply of these four crops is 18.5%, while the share of corn amounts to 54.3%, barley — 22.7% and only soybean's share is much less — 4.5%.

NIBULON's major export crops in 2018 were corn, wheat, barley, and rapeseed. The Ukrainian agroholding's total export deliveries of these four crops exceeded 4.55 million tons, thus providing the company with the second position in the rating of the largest exporters of grain from Ukraine.

In absolute terms, the results of the company's rapeseed exports are relatively modest — less than 200 thou. tons, 4.3% of the total supplies. For comparison, NIBULON shipped 2.2 million tons of wheat, 1.7 million tons of corn, and almost 500 thou. tons of barley.

Rapeseed is the number three crop for COFCO Agri Resources Ukraine, a subsidiary of the Chinese national corporation COFCO (China National Cereals, Oils and Foodstuffs Corporation). The company exports corn and wheat in significantly larger volumes. In the supply structure of three crops, the share of rapeseed accounts for only 2.5%. Nevertheless, the general trend — the increase in COFCO Agri Resources Ukraine’s export volumes — concerns rapeseed as well.

In the territory of the Mykolaiv Sea Commercial Port (Mykolaiv region), COFCO’s high-capacity grain terminal has been operating for three years now. The company invested USD 75 million in its construction. The annual capacity of the transshipment complex is 2.5 million tons. Although it is less than COFCO Agri Resources Ukraine exports over the year (2018: more than 3.3 million tons), the terminal definitely plays its part.

MHP is positioning export of agricultural crops as a source of additional income and a tool for hedging currency risks.

In general, the past crop production season for the holding was a success. In 2018, MHP harvested 2.65 million tons of crop (mainly grains and oilseeds), 33% more from a year earlier.

The private enterprise Poliexpo is a part of the Ukrainian group of companies of the same name and specializes in agricultural exports. Rapeseed is one of the five main crops in the crop rotation system of the group's production enterprises. The other four are wheat, barley, soybean and sunflower.

In 2018, in terms of export volumes, the Poliexpo Group is listed only in one rating, a rapeseed one.

In terms of value (taking into account the average export prices provided by the State Statistics Service), in 2018 Poliexpo exported rapeseed worth USD 3.2 million.

The company Suntrade, a U.S. based Bunge's parent-subsidiary in Ukraine, is not for the first time listed in the top ten rapeseed exporters. Despite the fact that corn and wheat are priority export crops for the company, it also exports rapeseed in significant volumes.

Following the results of H2 2017, which make up 97% of the total annual export volume, and, accordingly, in 2017, Suntrade exported more than 53 thou. tons of rapeseed, 2.7% of the total supply volume. This result ensured the sixth position in the rating. So, in terms of rapeseed exports, the past year for the company is clearly not a record one. Moreover, Suntrade has significantly reduced the volume of rapeseed export supplies by more than 10 times.

Agrolana Company is a newcomer to the rapeseed exporters rating. In terms of value (taking into account the average export prices provided by the State Statistics Service) in 2018, it exported rapeseed worth USD 97 thou. 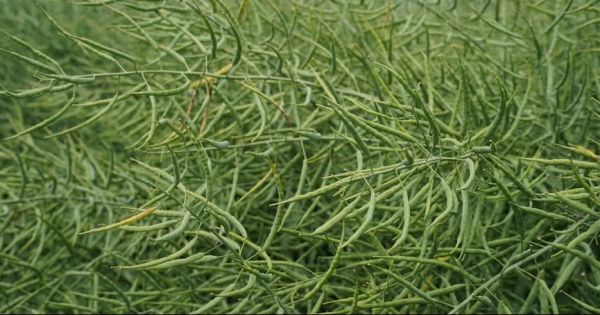 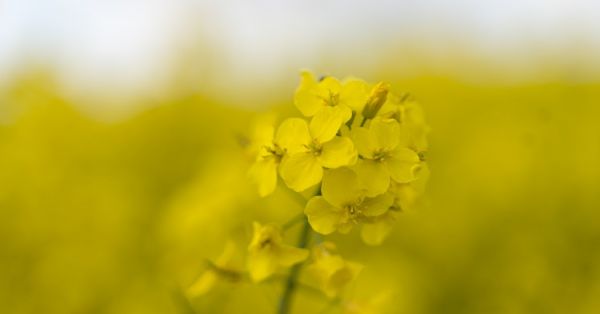 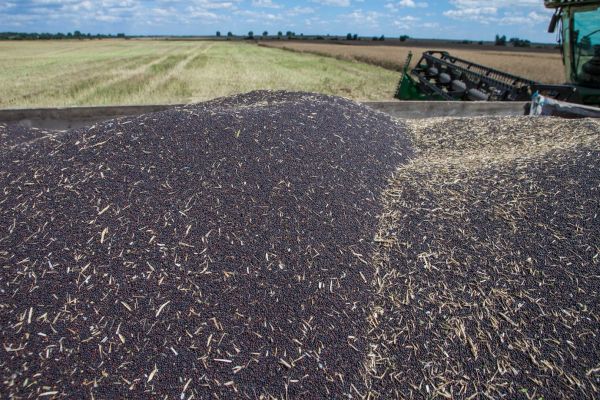