What if War Starts Tomorrow. Agriproducers, Port Operators and Traders on High Alert in Ukraine 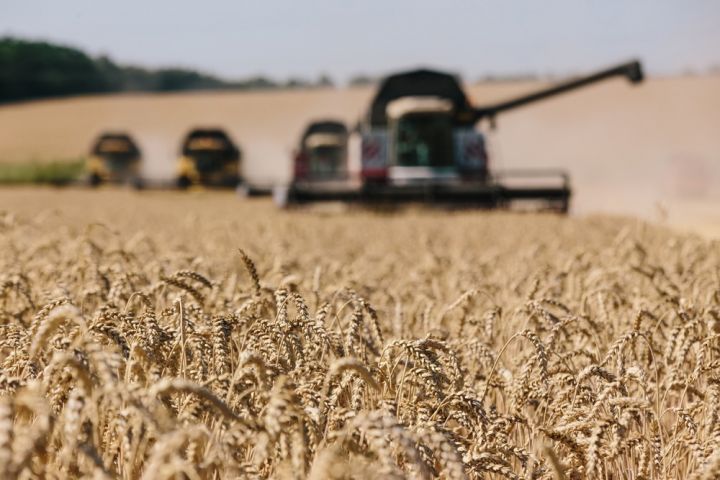 "People from all over the world, from Australia to Argentina, call and ask about Ukraine's agri commodities exports status," Maxigrain business development manager Elena Neroba describes her recent conversations with traders. She is reluctant to talk about the possible impact of Russian aggression on the grain market as she does not want to instill fear. Nevertheless, Elena Neroba admits that the news does its job. Grain prices in Chicago are moving up and corn prices in China have already risen amidst concerns over Ukraine's capacity to supply the contracted volumes. Since the start of 2022, the price of corn on China's exchange soared from 2662 to 2737 RMB/ton.

Headlines about tensions between Russia and Ukraine alone drive up wheat prices. The two countries, especially the eastern neighbour, are important market makers in the grain sector.

"The number one issue in the context of possible aggression is sanctions against Russia and its access to trade. This means that potential importers are concerned that one of the key players in the wheat market may be excluded from it or they will simply not risk buying such origins. Secondly, it may affect us as well. If military operations occur in the sea, the infrastructure will collapse and we will not be able to ship for exports. This creates more tension and consequently, the price of wheat has been growing for the last week and a half."

Another factor is the purchasing strategies of Ukrainian grain buyers. For example, whether to enter into forward contracts with Ukrainian producers or to work on the spot instead.

President of the Ukrainian Grain Association (UGA) Nikolay Gorbachov is convinced that foreign partners are not alerted. He says there is no risk in buying Ukrainian grain, the forwards are being arranged. Besides, Nikolay Gorbachov notes that military events are force majeure events, which can delay the time for fulfilling contractual obligations or even exempt from them.

If the conflict goes ahead, there will be an imminent rise in prices.

"Importers will be cut off from the Black Sea wheat and corn, so they will have to search for an alternative on other markets. And the cost is much higher. Consequently, prices and demand will surge. In such a scenario, the cost could easily increase by 20-30%."

When it comes to large holdings, they are more active in entering into forward contracts. Yuriy Havrylyuk explains this by "attractive prices." From the final buyer's perspective, there is no risk in forward contracts. Multinationals like Cargill, regardless of the situation in Ukraine, must execute the contract. The company will buy the grain from France, Australia, or elsewhere but the obligation will be closed.

Ports are on the line

"Any disruption in the Black Sea ports could be a shattering market force in the event of a conflict," says Peter Meyer, head of Grain & Oilseed Analytics at S&P Global Platts.

The ports are unquestionably the assets targeted by the aggressor in the first place. Recently, analysts of the Kyiv School of Economics made a report for Forbes Ukraine on the primary economic and security risks for Ukraine in the winter and spring of 2022, stating that "Ukraine's Black Sea ports could be one of the priority targets of Russia's aggressive actions."

A veteran of Ukrainian agribusiness Sergey Stoyanov in Facebook even urged the owners of port terminals to join forces for the ports not to become Russian ones. 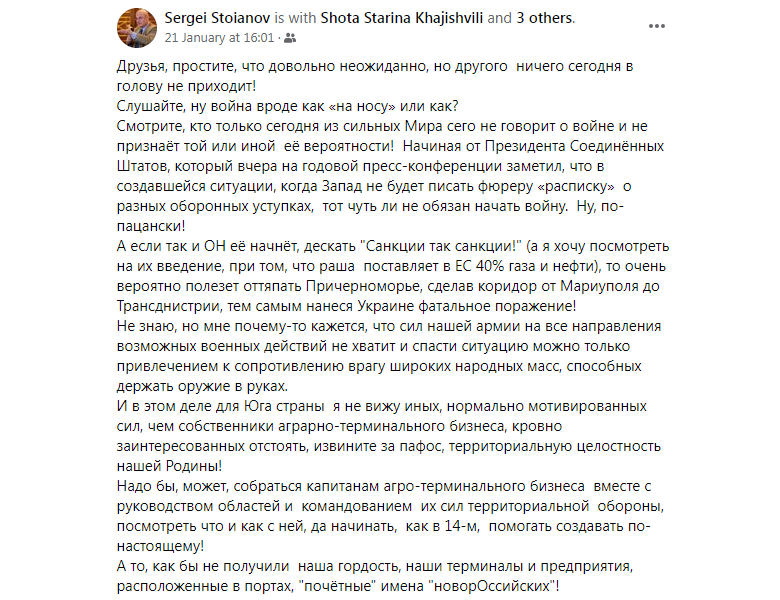 RISOIL co-owner Shota Khajishvili says the company is not yet elaborating a plan B for its terminals.

"Ports are crucial infrastructure objects, I understand that. But we are not preparing a plan B as such. If there is a war, we have to prepare, take the appropriate action. Although, I do not have much faith that it will come to this. Back in 2008, Russia brought an army of 160,000 to Georgia's borders against a 30,000 force of the latter. That is outnumbered by 5x. It is impossible to accumulate such an advantage against Ukraine. And Ukraine larger than Georgia in terms of territory, here are many more highly motivated citizens. Moreover, there have been several mobilization campaigns and a fairly good armor has been delivered lately."

Shota's fellow port businessman and TIS co-owner Andriy Stavnitser though has a contingency plan in case of aggression. If the city is captured, the company can turn the infrastructure assets into scrap metal. Such a plan has already been developed, and once completed it will be difficult to make assets usable back. Although Stavnitzer admits that this would be extremely disappointing. 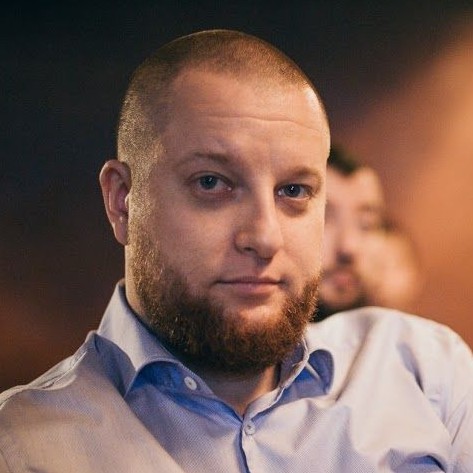 "I would like us to remember that Ukraine is an important participant in the global food security system. We are the world's third supplier of corn and the fourth of grain. Many grain shipments are linked to the Black Sea ports. Any delays, disruptions, cuts in supply including sanctions will definitely lead to higher food prices around the world. In 2021, prices already rose by as much as 30%. The Covid crisis, regular disruptions in trade, the invasion of Ukraine and military action in the Black Sea will literally put nearly 400 mln people at risk of food deficit in various parts of the world. None wants any of these happen." 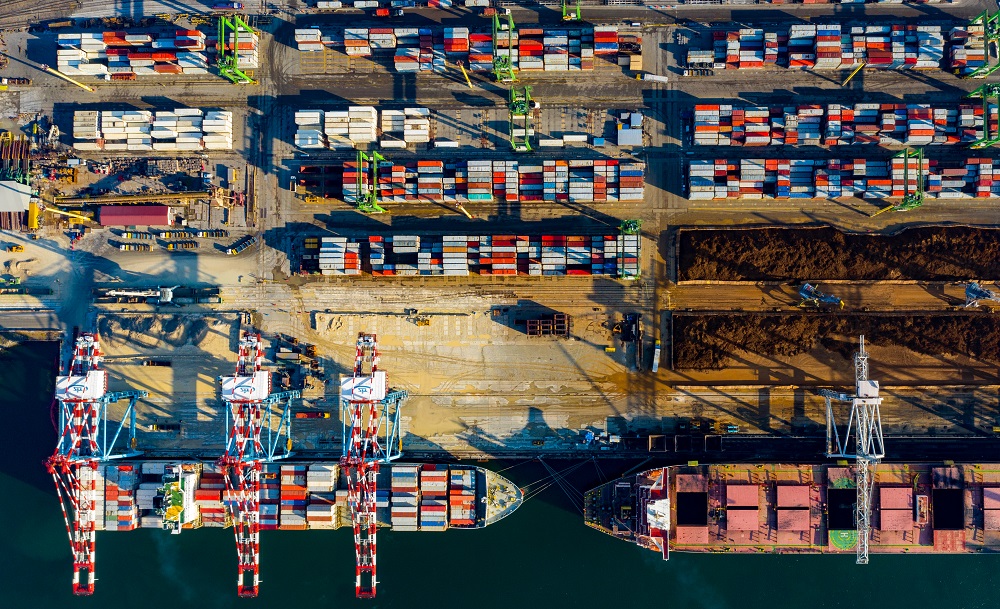 The biogas plant of the Calipso company is located 60 km away from the Russian village of Klymove. One of the largest massings of the Russian army near the Ukrainian border is located there. Fear of such a neighbourhood recently prevented the company's Dutch partners from attending a cold start of the biogas plant. They will be watching online. However, Anton Korobko, the company's executive director, urged them not to give in to the panic spread by the media.

"If war does break out, no contingency plan will make any difference," states Anton Korobko, Calipso executive director.

Yuriy Havrylyuk has been actively monitoring agrarians' attitudes for the past few days. He says that most of them reacted rather calmly: well, what can we do? Where do we move fields or machinery? Still, they are unconditionally determined to protect what is theirs. Although he recalls the case when an agriculture company from Chernihiv region relocated its machinery to the western regions over the risk of aggression, sold the crops.

"No one is going to go sell for cash, dispose of grain, run. And to a certain extent, it is not expected. Because in terms of business, risks, there is a point in selling part of the grain to the multinational companies and accumulate the currency, which is much more flexible in times of crisis than such massive assets as grain or machinery."

And there are also those spirits are remarkably high, these people are determined to defend their land at any price.

"We have got no specific plan, but the commitment is ardent. If war starts, we will defend our Motherland," says Dmytro Huletskyy, CEO of Dnipro Agro Group.

Oddly enough, multinational companies are more worried about the situation in Ukraine than their subsidiaries. Several large international grain traders told Latifundist.com that they had started to re-evaluate the assets and contacted insurance companies to estimate possible compensation payments.

"The appeals received by Arsenal Insurance are 100% from foreign agriculture companies. Ukrainian agriproducers, for the most part, have limited financial resources. Having no insurance culture, they are getting the minimum level of insurance coverage, i.e. the one that does not include coverage against military and political risks," notes Marina Avdeeva.

She adds that the company offers special programmes for insurance coverage in the event of military action, terrorist attacks and similar events. But the cost of such coverage is much higher than the standard one and depends on many factors. First of all, it depends on the political situation in the country, the location of the object from the border line, the Crimea, the border with Russia, and now with Belarus. This applies to all industrial sectors. Agribusiness, she admits, is neither exception nor an interested party in this coverage.

Many farmers mentioned the force majeure clause in their contracts. Ivan Kasynyuk, lawyer and partner at AGA Partners, urges not to be too confident about this clause. Even the fact that the war started, as long as "the railcars are running, the ports are operating," does not relieve a party of its obligations.

"I get that some agriproducers or traders may choose to appeal to force majeure if the price fails to go in the desired direction. But such a position will not survive arbitration unless you can prove that it was because of the war that you failed to deliver the grain, for example. Pursuant to English law, force majeure must inevitably affect the contract by impeding its performance and, importantly, a factor of irresistible force must arise after the conclusion of the contract."

The lawyer adds that in 15 years of practice he recalls only a couple of cases when one of the parties to a dispute managed to prove the occurrence of force majeure in GAFTA arbitration. In 2014, there were many willing to use the ATO(Anti-Terrorist Operation) factor to avoid fulfilling the terms of the contract. But no one succeeded, as the trade went on as usual. 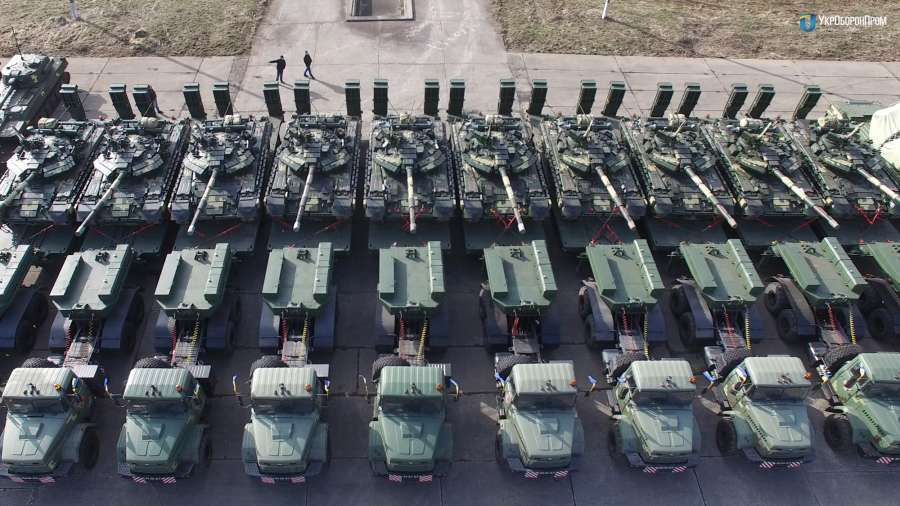 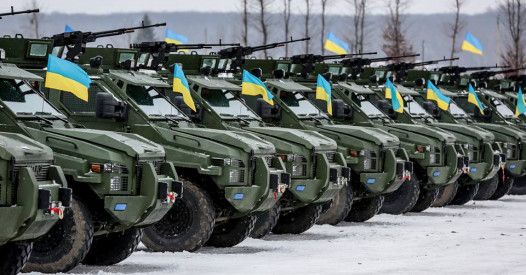 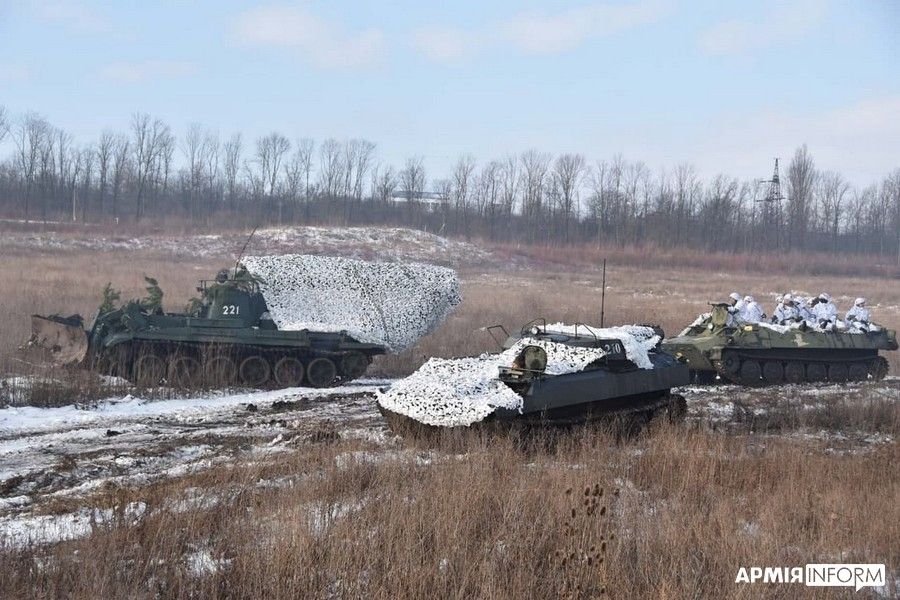 "The closer to the ground, the more people live by simple and pragmatic interests. They reflect less and theorize less," social psychologist Oleh Pokalchuk told Lb.ua.

And he added he was sick of journalists asking: "What would you advise people to do about their panic mood?" Panic exists only in the minds of a specific group of people, he said.

Our article is not meant to intensify the information micro-apocalypse. It is about understanding the mood and intentions of the business. We won't say well-known truths if we admit that "our brother is often made fun of" meaning that an agrarian needs nothing but a crop in the field. As evident, it is not that simple. 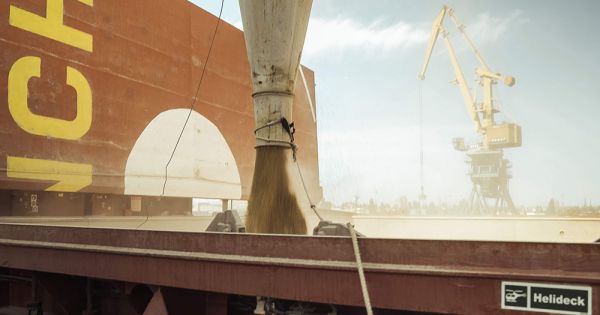 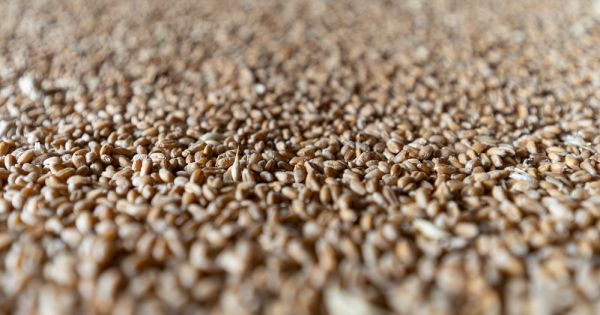 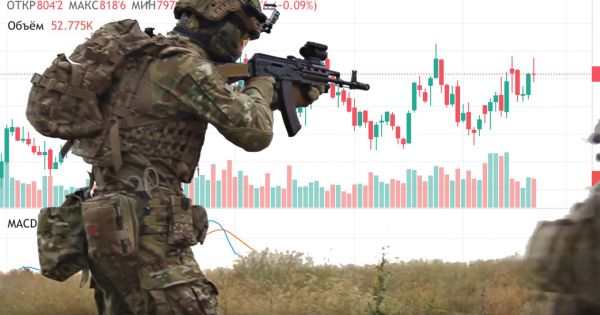